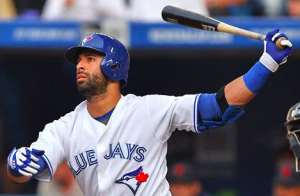 It’s been a wild and unpredictable offseason for outfielder Jose Bautista, but in the end, he’s ending up back where he started: with the Toronto Blue Jays. Multiple outlets are reporting that the Blue Jays and Bautista have agreed to a one-year deal with mutual options for the 2018 and 2019 seasons. Bautista will make $18 million in 2017, slightly more than he would have made had he accepted Toronto’s qualifying offer at the start of the offseason. The contract could be worth as much as $60 million if Bautista remains with the Blue Jays in 2018 and 2019.

A year ago, Bautista was said to be seeking a five-year extension worth $150 million, although he later refuted asking the Blue Jays for that much. After a season in which the 36-year old saw his numbers take a slight dip amidst multiple trips to the DL, getting anywhere close to that was pure fantasy. In recent weeks, it looked increasingly likely that Bautista would have to settle for a one-year deal. While only the first year of his new contract is guaranteed, it will pay Bautista more than the qualifying offer, which should be considered a win for the veteran in a market that has been so unwelcoming towards power hitters.

The caveat of the deal is that both sides have to exercise the option for Bautista to remain in Toronto beyond 2017. If Bautista stays healthy in 2017 and has a bounce-back year, the Blue Jays may want him back, but he may be inclined to test the free agent market again. On the other hand, if Bautista continues to miss time due to injury, the Blue Jays could decide he’s not worth the price it would take to exercise his options for 2018 and 2019, sending him back to the open market. In essence, this is a one-year deal, and only a specific set of circumstances will lead both sides to exercise their mutual option.

In the short term, Bautista figures to return to a familiar role, playing right field for the Blue Jays and providing a power source in the middle of Toronto’s lineup alongside Josh Donaldson and Troy Tulowitzki. With his defense in decline, the Blue Jays would certainly like to give Bautista more time at DH, especially with Edwin Encarnacion signing with the Indians. However, after the Blue Jays signed Kendrys Morales early in the offseason, he figures to be the primary DH, although he could also share time at first base with Justin Smoak and Steve Pearce. Nevertheless, there will be limited opportunities to use Bautista as a DH.

Of course, having Kevin Pillar in center field should help to mitigate Bautista’s defensive deficiencies in right field. Meanwhile, Pearce and Melvin Upton Jr. figure to share time in left field to complete Toronto’s outfield, with Ezekiel Carrera a capable backup at all three outfield spots.

With Bautista now back with the Blue Jays, Toronto’s lineup should look similar to last season outside of Encarnacion and Michael Saunders being replaced by Morales and Pearce. Ultimately, the Blue Jays decided that the player they know is better than taking a chance on a player they haven’t had in their clubhouse for nearly a decade. Assuming the 36-year old can continue to supply plenty of power, Toronto’s lineup should be among the best in the American League, giving them a chance to reach the ALCS for the third consecutive year.