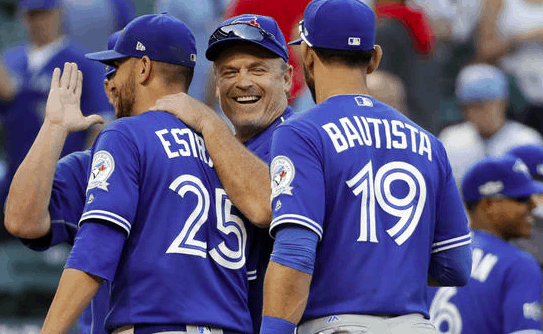 The Toronto Blue Jays had quite the complicated offseason, as the drama surrounding free agents Edwin Encarnacion and Jose Bautista dragged on for much of the winter. In the end, Bautista returned and Encarnacion left. After all that, how do the Blue Jays look heading into the 2017 season?

Toronto’s rotation had the lowest ERA in the American League last season, and the Blue Jays may be even better in that department this year. The team loses R.A. Dickey from the rotation but replace him with Francisco Liriano, who was great in Toronto following a mid-season trade last year and excelled with the Pirates from 2013 to 2015. Also, the Blue Jays will no longer have to worry about curbing the innings of Aaron Sanchez, potentially setting up the youngster to make a serious bid for the Cy Young if he can replicate the success he had last season.

The biggest question is whether J.A. Happ can repeat his phenomenal 20-win season from a year ago, which seems unlikely based on his age and track record. Nevertheless, he should at least be a solid part of the team’s rotation. The Blue Jays are also hopeful that Marcus Stroman can do better than the nine wins and 4.37 ERA he contributed last season, as he looked great during spring and the WBC.

Depth in the rotation could be an issue for the Blue Jays, as many of their top prospects are at least a year away from the majors. Problems could arise if Toronto suffers injuries to its starting five. However, Happ, Stroman, Sanchez, Liriano, and Marco Estrada make up what could be one of the most steady and consistent starting rotations in baseball.

Unfortunately, Toronto’s bullpen wasn’t quite as strong as its rotation was last season, and it’s hard to see significant improvement this season, especially after the loss of Brett Cecil. The good news is that Roberto Osuna is back and should continue to be a reliable closer. The Blue Jays should also be excited about the role Joe Biagini can play in their bullpen after a great rookie campaign in 2016.

However, the Blue Jays have merely pieced together the rest of their bullpen and are just hoping for the best. Joe Smith and J.P. Howell were solid additions in free agency but nothing to get too excited about. Moreover, Smith, Howell, and 40-year old Jason Grilli are the team’s top setup men outside of Biagini. That bullpen may be solid if unspectacular, but it doesn’t necessarily measure up to the bullpens that dominated baseball last October.

Offensively, the Blue Jays have had little trouble in recent years, although the loss of Encarnacion and Michael Saunders could potentially leave a hole in their lineup. The Blue Jays have added Kendrys Morales to serve as their DH, and while he’s not quite at the same level as Encarnacion, he should help minimize the drop-off. However, even with Bautista back in right field, there are some questions about the outfield, as Toronto will look to the likes of Kevin Pillar, Ezekiel Carrera, Melvin Upton Jr., and Steve Pearce to become consistent run producers.

Injuries could also be a problem for the Blue Jays in 2017. Bautista had multiple DL stints last season, and the 36-year old staying healthy all season is far from a guarantee. Troy Tulowitzki, as we know, has a long history of injuries, and there’s little depth on the middle infield if he or second baseman Devon Travis, another injury-prone player, misses significant time.

That being said, when everyone’s healthy, Toronto’s lineup has the potential to be one of the most powerful in baseball. Bautista, Tulowitzki, Morales, and former MVP Josh Donaldson in the middle of the lineup is no easy task for any pitcher. Travis, Pearce, Russell Martin, and Justin Smoak also bring plenty to the table offensively, giving the Blue Jays plenty of lineup depth as long as they stay healthy.

The Blue Jays won 89 games last season and have been to the ALCS each of the past two years. But making another deep run in October may be difficult considering the team’s injury concerns and pitching depth, not to mention how competitive the AL East looks on paper.

Look for the Blue Jays to finish 85-77 this year. It’s a record that will keep them competitive all season, but it may not be enough to get them into the postseason for a third consecutive year. Toronto will need everything to go right and everyone to stay healthy to win the pennant, but that’s hard to envision heading into the 2017 season.