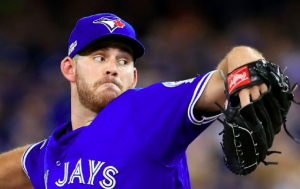 One of the storylines that got lost in the shuffle of the Toronto Blue Jays reaching their second straight ALCS in 2016 was that of pitcher Joe Biagini. Originally drafted by the San Francisco Giants, the Blue Jays selected Biagini in last year’s Rule 5 Draft and saw him emerge as one of their most important setup men in front of closer Roberto Osuna. With spring training getting underway, there is now talk of the Blue Jays stretching out Biagini and turning him into a starter in 2017.

Biagini was a starter throughout his time in the minors with the Giants. In 2015, he posted a 2.42 ERA while pitching at double-A. Despite skipping triple-A entirely, Biagini had immediate success in the majors. The 26-year old righty was 4-3 with a 3.06 ERA in 60 relief appearances for the Blue Jays last year. Biagini then made six playoff appearances, pitching 7.1 scoreless innings.

After instant success in a relief role, the Blue Jays are now considering making Biagini a starter again. Biagini says he’s not “campaigning” for such a move, but that he’d be open-minded to it if that’s what the team wants.

“If that’s going to be an opportunity at some point in my career, I would be glad to accept the challenge of doing it,” Biagini said when asked about being a starter. “I’d be happy to try to it. But I’d be happy to do whatever – like last year, what I did was great. Obviously, I’m not complaining. If somebody’s saying, ‘Hey, who wants an opportunity to start,’ I would raise my hand.”

Of course, the decision isn’t all that simple for the Blue Jays. Assuming everyone is healthy, Toronto already has five pitchers who are virtual locks to be in the starting rotation in Aaron Sanchez, Marcus Stroman, Marco Estrada, JA Happ, and Francisco Liriano. That means there’s no room for Biagini in the rotation at the moment, and no real urgency to make him a starter at this point in time. Nevertheless, the Blue Jays are considering such a move.

“There’s definitely that possibility, but I wouldn’t say we’re leaning that way by any means because he was so important to our bullpen a year ago,” Blue Jays GM Ross Atkins said Monday about moving Biagini to the rotation. “We’ve talked about it. He really would like to be considered a starting alternative and he recognizes what that means. He recognizes that means he could potentially have to spend some time in triple-A.”

While there may not be an immediate need for Biagini in the rotation, it’s important to note Toronto’s lack of rotation depth in the minors. The Blue Jays got 29 or more starts from five different pitchers last season, so there was no need to dip into their farm system for help. But if they need help this year, many of Toronto’s best pitching prospects are at least a year away from being major league ready. This lack of rotation depth is why the Blue Jays may need Biagini to serve as a starter at some point this season.

The Blue Jays were able to bolster their bullpen late in the offseason by signing veterans J.P. Howell and Joe Smith, making it a little easier to handle losing Biagini as part of the bullpen. Of course, outside of the trio of Howell, Smith, and 40-year old Jason Grilli, there’s uncertainty about the relievers who will form the bridge to Osuna. This could make the Blue Jays hesitant to remove Biagini from the bullpen after he played such an important role there last season.

The Blue Jays are clearly undecided on whether to make Biagini a starter or keep him in the bullpen, as there are pros and cons to each scenario. The plan for spring training appears to involve stretching out Biagini as a starter in case they need him in the rotation at some point this year. The fact that Biagini has the versatility to fill either role for the Blue Jays will make him an even more important part of their pitching staff in 2017.