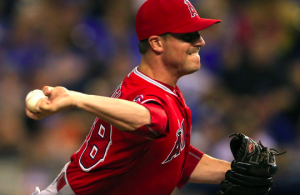 The Toronto Blue Jays have reportedly agreed to sign relief pitcher Joe Smith. The team has yet to confirm the deal, but multiple outlets are reporting that Smith has been signed to a major league contract for the 2017 season. The move comes on the heels of the Blue Jays signing lefty J.P. Howell earlier this week, as Toronto tries to shore up its bullpen before the start of spring training later this month.

The 32-year old Smith is a 10-year major league veteran who’s well known for his sidearm delivery. He began his career with the New York Mets in 2007 before being traded to the Cleveland Indians prior to the 2009 season. It was during his five years in Cleveland that Smith quietly became one of the best and most consistent setup men in baseball. Prior to the 2014 season, he signed a three-year, $15 million deal with the Angels and actually spent part of the 2014 season as the team’s closer. Last season, in the final year of his deal, the Angels traded Smith to the Cubs, although he did not pitch for them during the postseason.

During his 10 seasons in the big leagues, Smith has a career ERA of 2.93. However, his ERA the past two seasons have taken a noticeable leap after he posted a career-low ERA of 1.81 with the Angels in 2014. It’s important to note that Smith was hampered by a hamstring injury last season, both before and after his trade to the Cubs. Despite his sidearm delivery, the righty has actually held left-handed hitters to a lower batting average than right-handed hitters over the last handful of years, indicating he is far more than a righty specialist.

The Blue Jays are hopeful that Smith can shake off last season’s injuries are return to his days of being one of the most dependable setup men in baseball. Toronto is set at closer with Roberto Osuna, but the team’s bridge to Osuna does leave something to be desired, an issue the Blue Jays hope will be fixed by the additions of Smith and Howell.

In front of Osuna, the Blue Jays will be relying on the aging Jason Grilli and youngster Joe Biagini, who is hoping to replicate his stellar rookie campaign in 2016. Smith being added to the mix should give the Blue Jays another reliable option late in games. In fact, Smith may very well solidify a spot as Toronto’s 8th inning setup man. However, if there’s an injury to the starting rotation, the Blue Jays may need Giagini to move into a starting role, potentially hurting the bullpen and making Smith’s presence all the more important.

The additions of Smith and Howell this week will certainly help to solidify Toronto’s bullpen in 2017, but they may not necessarily result in significant improvement over what was one of the worst bullpens in the American League last year. Even with a dominant closer like Osuna, the Blue Jays have a bullpen that’s solid at best, and they may need to make one or two more additions to it before the start of the season.