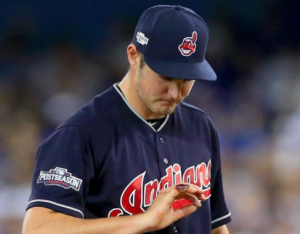 Before Game 3 of the ALCS, the Cleveland Indians made it seem like the cut starting pitcher Trevor Bauer suffered on his finger while doing routine maintenance on his drone was no big deal. Well, turns out, it was a big deal. Bauer was pushed back from Game 2 to Game 3 to give his finger a couple extra days to heal, but with two outs in the bottom of the 1st, Bauer was forced to leave because the cut on his finger would not stop bleeding, as blood could be seen on his pant legs and even on the pitching rubber.

Bauer said the cut on his right pinky had not bled at any point in the two days leading up to his Game 3 start Monday night. However, while facing Toronto Blue Jays shortstop Troy Tulowitzki, the fourth batter of the game, Bauer could feel the gash open up and begin to bleed.

“I looked down, it was bleeding pretty good,” Bauer explained after the game. “I was like, you know, my only chance to stay in the game here is to get through the at-bat and get in the dugout and hope to stop the bleeding. Sometimes the circumstances aren’t in your favor.”

Unfortunately for Bauer, he walked Tulowitzki, at which point Toronto manager John Gibbons brought the blood dripping from Bauer’s finger to the attention of home plate umpire Brian Gorman. MLB discussed the situation with both teams prior to the game, concluding that if Bauer was bleeding he would have to leave. Putting a bandage on his pinky to stop the bleeding would be considered a foreign substance on a pitcher’s hand, which is forbidden, forcing Bauer out of the game.

“When I went out there and got to the mound, I couldn’t believe how much it was bleeding,” explained Cleveland manager Terry Francona. “I can’t believe he hid it for the two pitches. I mean, it was on the dirt, it was on the rubber. And Brian Gorman looked at me and said, ‘He can’t pitch.’ I was like, ‘I know that.'”

As Bauer exited the field, Blue Jays fans gave him a standing ovation, excited to see Cleveland’s starting pitcher have to leave in the 1st inning. “That was the loudest standing ovation I’ve ever gotten after an outing,” Bauer said. “I guess I enjoyed the class of them cheering since I was injured.”

Of course, the Indians would have the last laugh, as six different relievers would combine to get the final 25 outs of the game, once again stifling Toronto’s high-powered offense, limiting the Blue Jays to just two runs. The Indians won the game 4-2, giving them a 3-0 lead in the series, just one win away from the World Series.

Now the Indians have to figure out how soon Bauer will be able to take the mound without the gash on his pinky bleeding. If Cleveland can’t close out the series over the next two nights, Bauer may be needed in Game 6 or 7 if he’s available. Indians president of baseball operations Chris Antonetti believes Bauer could be ready if the series goes that far and that he will certainly be ready to pitch in the World Series, assuming the Indians are able to close out the series.

Cleveland is expected to start Corey Kluber on short rest in Game 4, allowing Mike Clevinger to remain in the bullpen as backup, as Clevinger was not one of the six relievers used in Game 3. Rookie Ryan Merritt is slated to start Game 5 if necessary after the Indians were forced to juggle some things around following the injury to Bauer and the uncertainty of his situation.