What Do Sean Lee And Antonio Brown Have In Common?

Sean Lee is a linebacker for the Dallas Cowboys. Antonio Brown is a wide receiver for the Pittsburgh Steelers. They are both physical beasts that are among the best at what they do. Their franchises are two of the most successful that the NFL has ever seen. Besides that–they don’t have a darn thing in common, with one notable exception. Their respective teams recently did something for them that is rather unusual.

They figured out how to pay their player more when they did not have to. 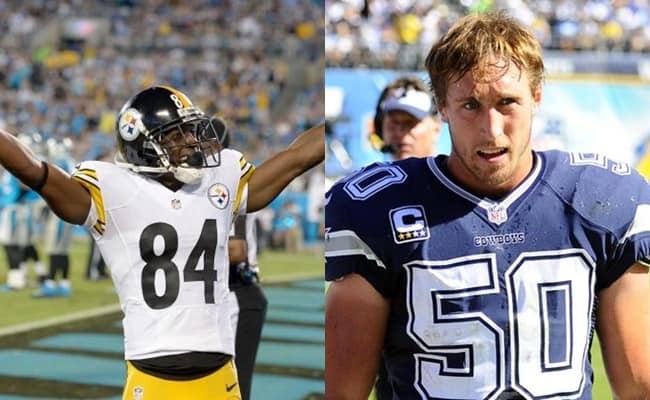 Antonio Brown is worth a lot more than his current contract, but he has two years left on his current deal. Sean Lee lost the chance to make an additional $2 million last season when he sat out the final game. Neither player was in a situation where they could demand anything and had no reason to expect their team was going to do anything to show them a little financial love–but they did.

Dallas has one of the better—but injury prone–linebackers in the NFL in Sean Lee. Last season, since Lee was injured, he ended up missing the final game of the season. Had he played, Lee would have triggered a clause in his contract that would have made him an additional $2 million for playing in 80 percent of the team’s defensive plays. Since he missed the game, he didn’t hit the mark.

Clauses like this are supposed to be incentives. If they make it—great for the player. If they don’t—oh well. The team could have very easily moved on and left this as is but instead decided to give Lee another chance. This time, rather than tie it to a season-long tally of how many plays he is in on, they made it simply a $125,000 roster bonus per game (totaling $2 million for the 16-game season) (SportsDay).

Pittsburgh’s situation is a little different. As a franchise, they have made it a practice not to negotiate contract extensions if a player has more than one year left. However, in wide receiver Antonio Brown they have a special case worth giving consideration.

Brown is one of the best in the business and certainly deserves to be paid much more than he currently gets (was slated to make $6.25 million in 2016). But with two years left on his contract, standard practice would be to make him wait—but the Steelers decided not to. Instead, they reworked his current deal, moved money from the final year of his deal into this year effectively upping his salary to $10.25 million this season.

But doesn’t that mean he’ll be screwed next year? Not at all—since he’ll have just one year left on his deal the team will renegotiate (which they have promised they’ll do) and pay him accordingly (NFL).

Neither team had to do anything for their respective player, and many would say they shouldn’t have done a thing. They know the risks involved in signing their contracts. Incentive clauses are meant to be targets a player hits; not targets that get redefined and made easier next year if they aren’t made. Longer contracts are supposed to give players a sense of security and allow teams to spread the cap hit out among multiple years.

If a player does not measure up to a contract, his agent made a good business deal by getting his client more money than he was worth. Should a player out-play his contract, the team made a great business decision. Someone has to; the NFL is a business after all.

You don’t make money by giving it away, but if you take care of your people before they start asking for it, you earn their respect and loyalty. You’ll still have to pay them accordingly when the time comes, but at least they will still be on your team and helping it win games.