Posted on February 18, 2017 by Bryan Zarpentine 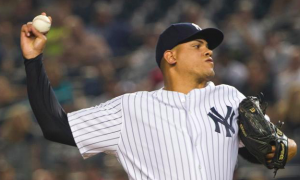 Most of the time, an arbitration hearing is not the best thing when it comes to building a positive relationship between team and player. The player has to sit in a hearing and listen to his team list all of his shortcomings and why he should not receive the salary he’s asking for. But in the case of setup man Dellin Betances, the New York Yankees may have made things even worse than usual.

After an arbitrator heard both sides make their argument on Friday, he announced on Saturday that the Yankees won the hearing. As a result, Betances will make $3 million in 2017, not the $5 million he was seeking. However, winning the arbitration hearing apparently wasn’t enough for Yankees president Randy Levine, who had some less than flattering words for Betances’ agent Jim Murray.

To be fair, Levine described Betances as a “great person” and “elite setup man.” However, he was quite critical of Murray’s attempt to treat Betances as a closer rather than a setup man. For the record, Betances has 21 saves over the past two seasons, but for the most part, he has been a setup man, and with Aroldis Chapman returning to the Bronx, Betances will be a setup man in 2017.

“What his agents did was make him a victim of an attempt to change a marketplace in baseball that has been well-established for 30 or 40 years,” Levine said. “And I feel bad for Dellin that he was used in that way by his agent because anyone who knows about this process (realizes) that the history is very much established — that $5 million goes to elite closers.”

Betances admits to feeling “trashed” after the hearing. But he says he was prepared to move on with the season until Levine spoke at a press conference Saturday and was so critical of Murray.

“I was planning on putting everything behind me until I was aware of Randy Levine’s comments saying I was the victim in this whole process and saying how much they love me, but then they take me in a room, trash me for about an hour-and-a-half,” Betances said. “I thought that was unfair.”

Betances also said that he may re-evaluate his willingness to pitch in the middle innings or pitch multiple innings, asking, “It is fair for me to say that?” He did concede that he will fight hard for his teammates and Yankees’ fans. However, his comments indicate that the issues between him and club have a chance to spill over onto the field. Yankees manager Joe Girardi said he believes the situation will all be in the past by the time the regular season starts.

Murray maintains that he thought $5 million was a fair asking price for Betances, who has made the all-star team each of the last three seasons. He chalks up the arbitration loss to a difference in philosophies. Murray was also confused as to why Levine felt the need to speak about the hearing at a press conference. “It is bizarre to me,” Murray said. “I have no idea why he would have a press conference today, win or lose. You’d have to ask him.”

There’s nothing either side can do to alter the arbitrator’s decision, as Betances’ salary for the 2017 season is now set in stone. However, the Yankees would be wise to end this war of words and do what they can to smooth things over with Betances and Murray. Having a disgruntled player, especially one who is poised to play a key role for the Yankees in 2017, is the last thing New York needs heading into the season.