Yankees To Release Alex Rodriguez, Will Retire This Friday

Posted on August 7, 2016 by Bryan Zarpentine 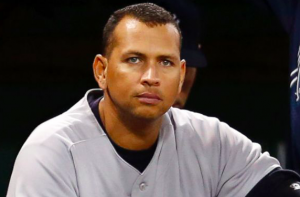 The New York Yankees announced Sunday that they have reached an agreement with designated hitter Alex Rodriguez in which Rodriguez will be given his unconditional release from the team and effectively retire from baseball. Rodriguez will play the final game of his career this Friday when the Yankees host the Tampa Bay Rays. After Friday’s game, Rodriguez will remain a part of the Yankees organization as a special advisor and instructor.

“This is a tough day. I love this game and I love this team,” said an emotional Rodriguez during Sunday’s news conference. “And today I’m saying goodbye.” Before the season, Rodriguez announced that he would retire after the 2017 season when his contract is set to expire. However, his poor performance and diminished playing time this season have put the Yankees in a position in which they are desperate to cut ties with him and move forward with younger players. The Yankees will continue to pay him the remainder of the $21 million he’s owed this season, as well as the $21 million he’s owed next season as part of a 10-year, $275 million contract he signed prior to the 2008 season. At the time, it was the biggest contract in professional sports.

Yankees managing general partner Hal Steinbrenner negotiated the agreement with Rodriguez. “After spending several days discussing this plan with Alex, I am pleased that he will remain a part of our organization moving forward and transition into a role in which I know he can flourish,” Steinbrenner said in a statement. “He’s a tireless worker and an astute student of the game. Alex has already proven to be a willing and effective mentor to many players who have come through our clubhouse, and I am confident that this next phase of his baseball life will bring out the best in Alex and the next generation of Yankees.”

Yankees GM Brian Cashman praised Rodriguez on Sunday for his ability to identify and evaluate talent, as well as his ability to mentor younger players. Rodriguez says his work as an instructor with the Yankees will begin next spring, as he plans to return to his home in Tampa following Friday’s game. His contract to be an advisor and instructor with the Yankees runs through December 31, 2017.

“I want to thank the Steinbrenner family for giving me this opportunity and for making me part of this team and for giving me an opportunity to stay involved by mentoring the next generation of Yankees,” Rodriguez said Sunday. “Hal, I’m grateful to you for the faith you’re showing in me today. No athlete ends his or her career the way you want to; we all want to keep playing forever. But it doesn’t work that way. Accepting the end gracefully is part of being a professional athlete. Saying goodbye may be the hardest part of the job, but that’s what I’m doing today.”

Rodriguez adds that he still thinks he can play but accepts that Friday will be the last game of his career. “You always think you have one more hit and can help the team win one more game, for sure. That wasn’t in the cards. That was the Yankees’ decision and I’m at peace with it.”

Historically, his career numbers speak for themselves. With less than a week left in his career, Rodriguez has 696 home runs, ranking him 4th on the all-time list, and 2,084 RBIs, which puts him 3rd on the all-time list. He has also won three MVP Awards, 10 Silver Sluggers, two Gold Gloves, and one batting title. He is also one of 29 players to eclipse the 3,000-hit mark. Whether those numbers will be enough to put him in the Hall of Fame in five year’s time amidst his connection with performance-enhancing drugs is a question for another day.