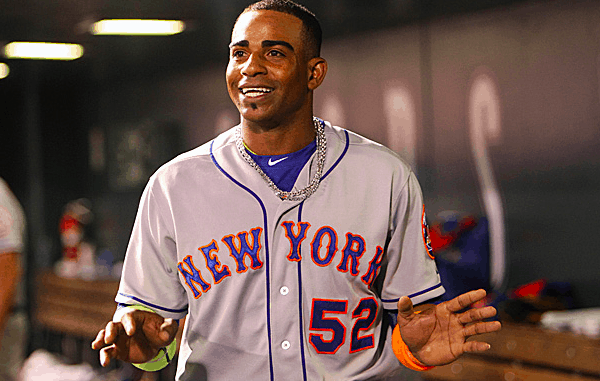 Outfielder Yoenis Cespedes may be the biggest free agent domino to fall this offseason. Much of the free agent market is dependent on where he decides to sign and how many dollars and years are included on his contract. Recent reports indicate that Cespedes is looking to land at least a five-year deal that could be worth as much as $130 million, a contract that could be problematic when it comes to Cespedes returning to the New York Mets.

Reports out of New York indicate that the Mets would be willing to offer Cespedes a four-year deal that’s worth up to $110 million, which would give him one of the highest annual salaries in baseball. However, the Mets are reluctant to add a fifth year onto the deal. If that is where the Mets are drawing a line in the sand, it could be a potential deal-breaker, as it could push Cespedes towards one of the other teams pursuing him this winter. In essence, the Mets are hoping that Cespedes’ desire to stay with the team is enough for him to accept a four-year deal instead of holding out for a five-year offer.

Cespedes has reached out to the Mets, expressing an interest in staying in Queens, and so the team knows if all other things are equal, he will likely re-sign with the Mets. However, the Mets would be taking a huge risk by not making all other things equal, especially considering all the other suitors Cespedes reportedly has after him.

The Dodgers, Giants, Nationals, and Yankees have all reportedly shown interest in Cespedes, and many believe that at least one of those teams will ultimately offer the Cuban outfielder a fifth year in order to lure him away from the Mets. The Dodgers have never been shy about spending and are looking to add a big bat this winter. The Giants also have a need for a power hitter and may have the resources to land Cespedes. The Nationals made Cespedes a long-term offer last offseason, albeit with a lot of deferred money, and would gladly take Cespedes away from the Mets. Finally, the Yankees appear ready to make big move, and should have the funds and willingness to meet Cespedes’ demands.

With at least four other teams that appear willing to give Cespedes what he wants, the Mets may be forced to match the best offer he receives from any other team, even if it means guaranteeing a fifth year. The Mets were somewhat fortunate to re-sign Cespedes last winter, but the market isn’t likely to come back to the Mets the way it did last year. If the Mets really want Cespedes back, they have to be ready to ante up in both years and dollars.

Of course, the Mets do have a few contingency plans in mind if they don’t get Cespedes, with Jose Bautista and Dexter Fowler being possible targets. The Mets could also stand pat and enter next year with three left-handed hitters in their outfield with Michael Conforto, Curtis Granderson, and Jay Bruce. However, the Mets do want Cespedes and he wants to return to the Mets. But just how much each side is willing to sacrifice to make a reunion happen remains to be seen.