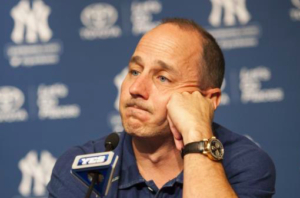 Over the summer, the New York Yankees did something they haven’t done in close to two decades: they were sellers at the trade deadline. Granted, GM Brian Cashman made some fantastic trades to give the Yankees a slew of talented prospects. However, all appears to be getting back to normal in the Bronx, as Cashman intimated on Friday that the Yankees are in the market for a big-money free agent to add to their lineup, just like the old days.

On the heels of a trade that sent Brian McCann to the Astros, the Yankees have an obvious need for a designated hitter, or even an outfielder. The Yankees have already been reported to be one of the suitors for Carlos Beltran, although players like Jose Bautista, Edwin Encarnacion, and Yoenis Cespedes may also be on their radar.

Cashman confirmed on Friday that he has spoken to Beltran’s representatives about a reunion after the Yankees traded him to the Texas Rangers at the deadline. “Carlos did a great job for us,” he said. “He was a tremendous performer this year and a leader and, obviously, someone it seemed like every potential postseason team had an interest in trading for. That says a lot about the respect he has throughout the game, and despite his age, he’s still productive.”

On the pitching side, Cashman also mentioned that the team has interest in a reunion with closer Aroldis Chapman, another player the Yankees traded last summer. “Chapman did a terrific job in the short time he was here,” Cashman said. “He did prove he can handle New York, and he’s someone that we would be interested in bringing back. I think there’s a lot of teams interested in doing that with him. That doesn’t guarantee that he will be here, but he certainly has heard from us and knows we’d like to have him back.”

Of course, while the Yankees are in the market for some high-priced free agents, Cashman adds that the team remains committed to giving young players like Aaron Judge, Aaron Hicks, and Tyler Austin a chance to prove themselves in 2017. He also wouldn’t rule out one or two more of New York’s core veterans being traded.

“I’ve had my fair share of hits on (Brett Gardner and Chase Headley),” Cashman explained. “They’re still here and they’re here for a reason, but we’ll see. We have our interest in getting younger and stronger and more flexible, and improve our present and our future. If all that provides that opportunity, then I think I’ll be talking to our owner and see if he’ll consider it.”

What direction the Yankees go in this offseason still remains to be seen, but judging by Cashman’s comments on Friday, just about every option is still on the table. That includes opening up the checkbook for one of the top free agents available. There’s no guarantee the Yankees end up spending big this winter, but there’s definitely a chance of that happening, which should assure Yankees fans that the team is getting back to its old ways.