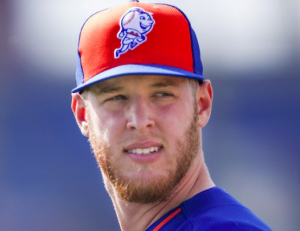 It’s just two days into spring training, and New York Mets pitcher Zack Wheeler, who has been on the shelf for the past two years, is already having problems with his elbow. While pitching his first official bullpen session of spring training, Wheeler experienced “tenderness” in his elbow. As a result, the Mets have put Wheeler’s throwing program for the spring on hold.

Wheeler is nearly two years removed from undergoing Tommy John surgery, but he has yet to pitch in the big leagues since the end of the 2014 season. The Mets were hopeful he would be able to return for the second half of last season, but multiple setbacks prevented him from doing so. Wheeler pitched just one inning in a minor league rehab start last year, his only official action since his surgery.

The Mets are doing their best to avoid calling this a setback for Wheeler. Instead, they say they are being extra cautious. “He had a little bit of tenderness after his last bullpen,” Mets pitching coach Dan Warthen said Wednesday. “We’re not going to push it. We want to see this kid get healthy and once he gets healthy, stay healthy. We will have kid gloves with him.”

Wheeler has been in camp and throwing for most of February. However, he did not throw on Tuesday or Wednesday. He underwent a routine physical on Monday as part of the official start of spring training, and the exam did not show any structural damage in his right elbow.

The Mets believe the elbow “tenderness” could be a result of scar tissue that formed as a result of a platelet-rich plasma injection Wheeler received last August following a setback in his rehab. The team is hopeful he’ll be able to throw off a mound as early as Friday. Nevertheless, the Mets are going to be cautious with Wheeler, especially as he tries to catch up to New York’s four other frontline starters after two years away from the field.

“We have to be careful when he’s throwing next to the rest of those guys because he wants to be one of the five,” Warthen said. “You can’t blame him for that because he earned it a long time ago. But we’ve just got to be extremely careful of this kid because it’s a special arm, and it needs to be healthy when he gets back.”

Even if the elbow issue clears up in short order, Wheeler still finds himself in a competition for the last spot in New York’s rotation with Robert Gsellman and Seth Lugo. Earlier this month, Wheeler spoke about his desire to avoid the bullpen and remain a starter. However, he’s going to have to earn that spot in spring training against two pitchers in Gsellman and Lugo who were outstanding for the Mets last September and played an important role in getting the team to the playoffs.

Wheeler will also have to deal with an innings limit in 2017 after not pitching in back-to-back years. Warthen estimates that the club won’t let Wheeler throw much more than 100 innings this year, which could force him to the bullpen at some point this year, whether he likes it or not. At the same time, Warthen believes that considering Wheeler’s injury history and the difficulty he’s had during his career recovering between starts, the bullpen may not be a great fit for him.

Of course, the issue for Wheeler right now is being able to pitch pain-free, which isn’t yet the case after the Mets were forced to hold him back due to a tender elbow. When Wheeler begins throwing consistently and appearing in spring training games, the Mets can start thinking about how he fits into their plans for 2017. But until that happens, there will be lingering concern over the health of Wheeler’s right elbow.