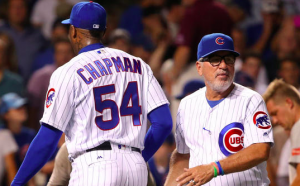 Aroldis Chapman is officially a member of the New York Yankees again, and he’s wasted no time speaking his mind about his brief but fruitful tenure with the Chicago Cubs. Specifically, Chapman has disparaging words for how Chicago manager Joe Maddon used him during the World Series. Of course, the Cubs emerged victorious in the World Series, in large part because Chapman’s heroics, but that hasn’t stopped Chapman from accusing Maddon of misusing him.

“Personally, I don’t agree with the way he used me, but he is the manager and he has the strategy,” Chapman said during a conference call upon his return to the Yankees. “My job is to be ready, to be ready to pitch, however that is, however many innings that is, I need to be ready for that. I need to go in and do my job.”

With the Cubs facing elimination in Game 6, but holding a five-run lead, Chapman entered with two outs in the 7th inning. He finished the 7th and then pitched a scoreless 8th. However, with the Cubs then leading by seven runs and three outs away from forcing a Game 7, Maddon sent Chapman back to the mound to start the 9th after already throwing 20 pitches, a fairly high number for a closer. Chapman faced one batter before being removed from the game.

“I don’t think I needed to come into the game,” Chapman said about Game 6. “The important game was going to be Game 7 because basically we had that game almost won, and the next day I came in a little tired.”

Maddon defended his move immediately following Game 6. However, Maddon did end up backtracking and admitted that he made a mistake by sending Chapman back to the mound because he didn’t have another pitcher ready in the bullpen.

When a tired Chapman entered Game 7 in the 8th inning, he allowed a two-run home run to Rajai Davis that allowed the Indians to force extra innings, nearly costing the Cubs the game and the World Series. “I was a little tired. I felt a little different,” Chapman said about pitching in Game 7. “I could go out to pitch, do my job, but you’re not as efficient if you’re tired.”

Chapman says he never said anything to Maddon, believing it was not the time or place to question his manager. “I never told him about my opinion with the way he was using me,” Chapman explained. “The way I feel as baseball players we are warriors. Our job is to be ready to do what we need to do on the field. They send me out there to pitch, I’m going to go out there and pitch.”

Chapman tried not to use fatigue as an excuse for his blown save in Game 7, but his words imply that Maddon didn’t put him in a position to succeed. “If I’m healthy, I’m going to go out there and pitch. If I’m tired, I’m going to put that aside and just get through it. It is kind of like a warrior, they send you somewhere and you have to go there and your mentality is you have to go there and do your job.”

Maddon has not responded publicly, but he certainly can’t be pleased to hear Chapman’s criticism of him, especially since the Cubs did eventually win the World Series, with the lefty being a big reason why. It’s also a little surprising to hear Chapman be so critical after he earned a World Series ring. Nevertheless, Chapman, who is now back with the Yankees, had no problem throwing his former manager under the bus.