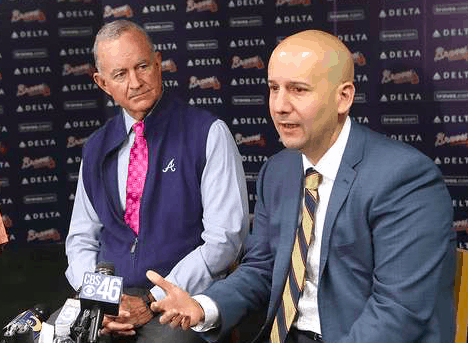 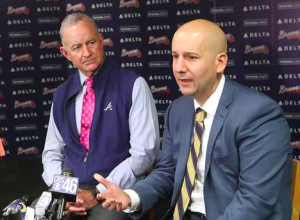 To the surprise of many, the Atlanta Braves have been one of the most active teams early in the offseason. Not only are the Braves in the mix to acquire Chris Sale via trade, but the rebuilding Braves have also signed veteran pitchers R.A. Dickey and Bartolo Colon. In recent days, Atlanta GM John Coppolella and Braves president of baseball operations John Hart have opened up about their reasons for signing for Dickey and Colon, as well as their plans to make the team competitive sooner rather than later.

Over the past couple of years, the Braves have made a series of trades aimed at building a farm system that is now one of the best in baseball. Coppolella and Hart say that plan hasn’t changed, despite the club investing more than $20 million in a pair of pitchers who are in their 40’s. However, while Atlanta’s front office believes that they will return to prominence behind young pitching, the signings of Dickey and Colon will help take some of the pressure off their young pitchers in the short term.

The Braves saw young pitchers like Aaron Blair and Matt Wisler endure great struggles during their time in the big leagues in 2016, perhaps because they were forced to take roles in Atlanta’s rotation instead of getting more seasoning in the minors. The Braves have a slew of young pitching prospects still in the minors, and the presence of Dickey and Colon will help prevent them from having to rush those pitchers to the majors just to fill spots in Atlanta’s rotation.

“We’ve been in this for about two years trying to rebuild this the right way, and given a lot of starts to a lot of kids that we really like that may not have been ready,” Coppolella explains. “I think by being fortunate to where we could add R.A., he’s someone who’s going to take the starts and give these kids more time.”

Coppolella laments that the Braves ended last season with only two pitchers, Julio Teheran and Mike Foltynewicz, whom they could count on from one start to the next. He believes that the depth and experience the Braves have added to their rotation will pay off in both the short term and long term. “Being able to add two really good starting pitchers that are as good off the field as they are on the field is going to really help this team make some strides in short order,” Coppolella says.

Hart believes that the additions to the rotation can help the Braves compete in 2017, as the likes of Blair and Wisler will be luxuries instead of necessities. Dickey and Colon will also help bridge the gap to the next wave of pitchers, many of whom are a year or two away. “Rather than keep giving starts to guys that aren’t going to fit for us long term or taking guys maybe before their time, we felt it was better for us to go out and get the veteran pitchers,” Hart explains.

Rather than relying almost exclusively on young pitchers, as they did in 2016, Hart says the Braves will mix veterans with young pitchers in 2017. “We’re certainly going to have at least one, maybe two youngsters in this rotation as we go forward,” Hart says. “It’s a long season, a lot of things happen, and a big part of what (Coppolella) and I are going to be focused on certainly is what’s going on at the major league club, but we pay attention to what’s happening down below.”

In Dickey and Colon, the Braves couldn’t have found two better pitchers to fill their rotation and help mentor their young starters. Both are professionals and have displayed incredible consistency in recent years. Whether those two guys will be enough to make Atlanta relevant in the NL East in 2017 remains to be seen, but they are ideal candidates to help the Braves form a bridge to all of their young players.