"Mr. Price has been given the "Billy Walters treatment" by the betting establishments in the Las Vegas area, due to his distinct ability to pick winners and cost casinos millions."
Home
Baseball
Boston Red Sox Unconcerned With Eduardo Rodriguez Knee Injury 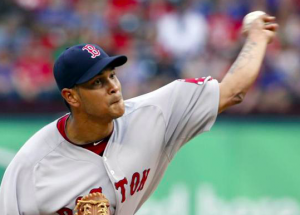 The Boston Red Sox are officially not concerned about the knee injury suffered by left-handed starter Eduardo Rodriguez earlier this week. Rodriguez sustained the injury, which is being described as a “tweak,” on Tuesday when he slipped off a mound while pitching in winter ball in his native Venezuela. However, at this point the Red Sox don’t believe the injury is anything serious that will have an impact on Rodriguez in 2017.

Red Sox president of baseball operations Dave Dombrowski downplayed the injury when he addressed it on Thursday. Dombrowski says it’s likely that Rodriguez will be shut down for the remainder of the winter ball season, but that right now there are no plans for Rodriguez to travel to Boston to be examined by team doctors, which would certainly be the case if the injury was considered serious.

“At this point, we are not sure if he is coming to Boston or not,” Dombrowski said. “We are staying in contact with him in Venezuela and will determine that over the next few days.” Right now, the injury is best described as discomfort in the right knee. The Red Sox obviously believe that the pain will subside with time and that by holding Rodriguez out of any further winter ball games he’ll be fully healthy for the start of spring training.

Of course, one can’t help but recall that Rodriguez missed most of spring training and the first two months of the season in 2016 due to a dislocated knee. At the time, the Red Sox didn’t believe the injury was serious, much like they are now. However, that injury derailed Rodriguez for the first half of the season, which is why it’s somewhat surprising to see the Red Sox be so nonchalant about this injury. Few would blame them for overreacting a little and summoning Rodriguez back to Boston for further examination as soon as possible, especially since the injury is on the same knee.

Rodriguez didn’t return from the injury last season until the end of May. When he did come back, his first six starts of the season were dreadful, as he altered his mechanics to protect the injured knee, posting an 8.59 ERA in those six starts. He was finally demoted to the minors to sort out his mechanics, eventually coming back strong the second half of the season, posting a 3.24 ERA in his final 14 starts of 2016.

At the moment, Rodriguez is slated to represent Venezuela in the World Baseball Classic in March, which was part of the reason why he was pitching this winter. Knowing that he will be pitching in competitive games before the start of the regular season, it’s even more surprising that the Red Sox wouldn’t want their doctors to take a look at Rodriguez, even for a minor injury.

Coming off a strong finish in 2016, Rodriguez is penciled in as one of Boston’s five starters in 2017. However, with Chris Sale joining the rotation alongside David Price and reigning Cy Young winner Rick Porecello, Rodriguez may find himself in a competition with Drew Pomeranz and Steven Wright for the final two rotation spots.

A healthy Rodriguez replicating the second half of 2016 could be a great asset for an already strong Red Sox rotation in 2017. Boston believes his knee injury is not serious, and that may turn out to be the case, but it’s odd that the Red Sox wouldn’t take more precautions with one of its rising stars to avoid a similar situation to what happened the first half of 2016.