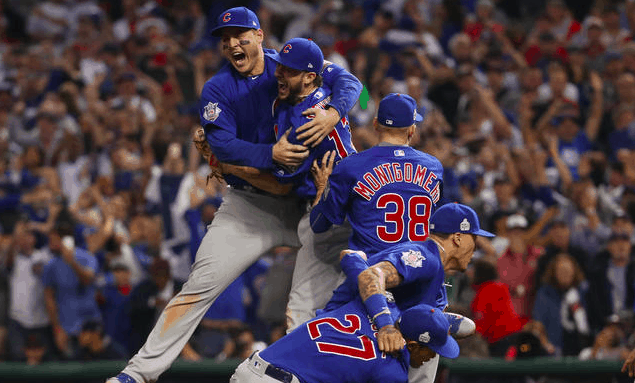 The Chicago Cubs made history last season by winning their first World Series title in more than a century. But none of that matters now, as all 30 teams have a clean slate heading into the 2017 season. Nevertheless, the Cubbies are set up to be competitive for many years to come. Can they repeat in 2017?

The Cubs had the best rotation in baseball last season, and with the exception of Jason Hammel, they’ll have the same group of starters in 2017. The trio of Jon Lester, Jake Arrieta, and Kyle Hendricks should inspire great confidence in Chicago’s chances for a repeat.

However, John Lackey could be a concern, as he’s now 38-years old and has had plenty of ups and downs during the course of his career. Meanwhile, the final spot in the rotation is set to be split between young lefty Mike Montgomery and the injury-plagued Brett Anderson, so there’s some semblance of concern about the back end of the rotation.

Another thing to look out for is the fatigue factor. All four returning starters made at least 29 starts last season and then all four pitched deep into October. Coming off such a heavy workload last year, the Cubs have to be on the lookout for injuries or issues related to fatigue from their starters this season.

The Cubs won’t have Aroldis Chapman shutting things down at the end of games as they did the second half of last year, but they do have a bullpen that looks good on paper heading into 2017. Chicago acquired Wade Davis to be its new closer, and despite a couple stints on the DL with arm issues last season, he should be a suitable replacement for Chapman.

The Cubs also have an impressive amount of depth in front of Davis, as they added Koji Uehara to their contingent of setup men that already includes Hector Rondon and Pedro Strop, who were both quite reliable last season. Chicago also has high hopes for young flame thrower Carl Edwards Jr., who flashed late-game potential last season. The Cubs are also hoping Brian Duensing can provide them with a lefty specialist, something they may otherwise lack if Montgomery is part of the starting rotation.

Offensively, there are few questions about the Cubs, as the middle-of-the-order trio of Kris Bryant, Anthony Rizzo, and Ben Zobrist remains intact. The Cubs also have Javier Baez and young catcher Willson Contreras in the mix, and there are high hopes for young center fielder Albert Almora Jr.

The biggest question facing the Cubs is replacing Dexter Fowler in the leadoff spot. However, manager Joe Maddon is expecting to insert Kyle Schwarber into that role. Schwarber, of course, missed most of 2016 with a knee injury and now has a chance to provide a boost to an already potent lineup. The second biggest question is Jason Heyward, who struggled in his first season in Chicago last year and has had a rough spring thus far. The Cubs have ways to replace Heyward, but it’d be tough to sit a player signed to a $184 million contract last winter.

Despite these questions, the Cubs should be fine offensively in 2017 as long as they stay healthy and as long as their young stars continue to produce the way they did last season. At this point in time, that feels like a safe bet.

Everything fell perfectly into place for the Cubs last season, as they won 103 games and went on to win the World Series. Of course, it’s hard to imagine everything falling perfectly into place like that again this season without the Cubs having to face some adversity either on the injury front or with regard to young players taking a step back.

Look for the Cubs to go 99-63 this season. They won’t match last year’s win total, but they’ll come close, and 99 wins will be more than enough to repeat as NL Central champions. There will be questions about injuries and complacency, but it’s hard to envision the Cubs not being a World Series contender in 2017.