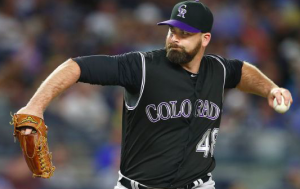 A previously frozen market for relief pitchers is finally beginning to thaw, and the defending American League champion Cleveland Indians are taking advantage. Multiple outlets are reporting that the Indians have agreed to a deal with free agent lefty Boone Logan. The deal is reportedly a one-year deal worth $5.5 million, with a $7 million club option for 2018 or a $1 million buyout. It’s not quite the three-year, $19 million deal Mike Dunn got from the Rockies, Logan’s former team, but it’s good money for a reliever with no experience serving as a closer at the major league level.

Many considered Logan to be one of the best left-handed relievers on the market this winter. He is an 11-year major league veteran who just finished off a three-year stint with the Rockies. His numbers improved in each of his three seasons in Colorado, culminating with last year’s campaign in which he posted 3.69 ERA and held opposing hitters to a .166 batting average, an ideal season for a contract year. He profiles as a lefty specialist, although he can hold his own against right-handed hitters.

The Indians being the team to sign Logan is a bit of a surprise, as most believed that the club had limited money left to spend this winter after signing slugger Edwin Encarnacion. However, they found the money, and the signing of Logan is further indication that the team’s ownership is committed to winning a championship after the Indians came within one game of a World Series title last year.

The addition of Logan will give a boost to a bullpen that had the second best ERA in the American League last year and a pitching staff that most consider to be one of the best in baseball. The Indians return closer Cody Allen, as well as set up men Andrew Miller, Bryan Shaw, and Dan Otero, all of whom are coming off strong seasons in 2016. Cleveland also acquired Carlos Frias in a trade earlier this week, giving them another option coming out of the bullpen.

Logan will undoubtedly be the second best lefty in Cleveland’s bullpen behind Miller, with rookie Ryan Merritt also being an option from the left side. The presence of Logan as a true lefty specialist should allow the Indians to save Miller for high-leverage situations late in games. It could also give manager Terry Francona the option of using Miller earlier in games if necessary, knowing Logan is available to face a tough lefty later in the game.

Even if Logan doesn’t become a prominent member of Cleveland’s bullpen, he has a chance to be a key addition for the Indians because his presence will take pressure off the rest of the bullpen. Having a veteran in the bullpen who can be counted on to get outs against left-handed hitters is an asset for any major league bullpen. For a team like the Indians with championship aspirations, it’s a critical component to have, making Logan a great addition to an already strong bullpen.