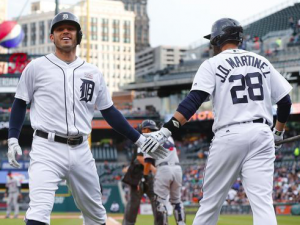 At the start of the offseason, the Detroit Tigers teased the possibility of a fire sale over the winter. However, it ended up being all talk and no action, and so Detroit’s roster is strikingly similar to what it looked like a year ago when the Tigers were in contention for a playoff spot until the final weekend. Thus, the Tigers will fancy themselves as a playoff contender this season. Will a new year yield different results for the Tigers in 2017?

The top half of Detroit’s rotation has a chance to be one of the best in baseball. Justin Verlander is still one of the game’s premier aces, winning 16 games and posting a 3.04 ERA last season. Meanwhile, reigning Rookie of the Year Michael Fulmer was nearly as good in 2016. The x-factor in the group is Jordan Zimmermann, who had immense struggles in his first year in Detroit last season amidst injury problems. However if Zimmermann can come back healthy in 2017 and pitch at the level he has in the past, it’ll be hard to find a better trio than the one the Tigers have in Verlander, Fulmer, and Zimmermann.

On the back end, the Tigers are hoping that lefties Daniel Norris and Matthew Boyd can continue to emerge as viable big league starters. Both finished last season strong and could be much better than most team’s no. 4 and 5 starters. The Tigers also have Anibal Sanchez available as rotation depth in case they need him.

Unfortunately for the Tigers, their bullpen was not particularly strong last season and they did little to change that over the winter. Closer Francisco Rodriguez saved 44 games last season, but the 35-year old also posted a 3.24 ERA, his highest since 2012, potentially showing signs of decline.

Detroit has a few solid setup men, as Kyle Ryan and Bruce Rondon are both coming off strong seasons while Alex Wilson has been a steady force for the Tigers the past two years. However, compared to some of the other teams in the American League with postseason aspirations, Detroit’s bullpen lacks both depth and dominant late-inning relievers.

The Tigers were one of the better offensive teams in the American League last year, and while the lineup remains largely the same from 2016, there are some areas of concern, particularly in the outfield. With Cameron Maybin being traded to the Angels early in the offseason and J.D. Martinez out with a foot injury at the start of the season, Detroit’s outfield will consist of platoons between largely unproven players in both center field and left field at the start of the season. There is also pressure on Justin Upton to have a big year after a sluggish first season in Detroit.

Fortunately, the rest of Detroit’s lineup is in great shape. Miguel Cabrera remains one of the best hitters in the game and will anchor the middle of the order for the Tigers. Cabrera should also have plenty of help around him from Ian Kinsler, Victor Martinez, and Nick Castellanos. Even with some questions in the outfield, the Tigers have enough heavy hitters to be better than average offensively in 2017.

After winning 86 games last year, the Tigers should once again be in the hunt for a playoff spot in 2017. The team wasn’t dismantled over the winter as some thought it would; in fact, Detroit’s rotation may be even stronger than it was a year ago.

Look for the Tigers to finish 88-74. Surprisingly, that’s a slight win increase from last year. Detroit’s rotation will be formidable this year, although the bullpen may let the Tigers down from time to time. Winning 88 games is a great accomplishment, although it won’t be enough to get them past the Indians in the AL Central, forcing Detroit to take its chances in the wild-card race.