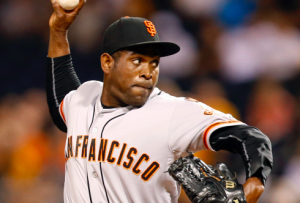 In the 9th inning of Game 4 of the NLDS, the San Francisco Giants bullpen suffered an epic meltdown that handed the game and series to the Chicago Cubs. The Giants used five different relief pitchers in the inning, allowing four runs and spoiling a great performance by starter Matt Moore. However, one pitcher not used in the 9th inning was the team’s former closer, Santiago Casilla, who had no trouble expressing his displeasure after the game at not being used by manager Bruce Bochy.

Despite having nine blown saves this season, Casilla did save 31 games for the Giants in 2016. But in an inning in which five other relievers entered the game, Casilla was never even told to warm up. After sitting and watching the rest of the San Francisco bullpen blow a three-run lead, unable to help, an emotional Casilla could be seen at his locker following the game, crying with his head in his hands.

“I never had that moment before during five years here,” Casilla said after the game. “I had a little struggle. But everybody [in the bullpen] has had their bad moments. I think they forgot all the great moments I’ve had here. I’ve pitched a lot in the playoffs and done my job. I know I am a good pitcher.”

Casilla’s only other appearance in the series was in Game 2 when he allowed two hits but also recorded two outs as part of a scoreless 6th inning. That outing was the 25th playoff appearance of his career, spanning 19.2 innings. In that time, Casilla has an ERA of 0.92. He was 4 for 4 in save opportunities during the 2014 postseason when the Giants won the World Series, so it’s not hard to see why he was confident in his abilities despite having an up and down season.

After such an awful collapse, it’s easy to second guess Bochy’s decision-making in the 9th inning. But even if the Giants had been able to hold the lead in the 9th, it’s hard to fathom how Casilla, who was the team’s closer for more than two years, wasn’t one of the five relievers used. Considering his track record in the playoffs, it’s hard to see how Bochy could trust five other relievers more than Casilla, which would certainly explain why Casilla was upset and inconsolable after Tuesday’s game.

After losing his job as the closer and not being used in Game 4, it looks like this could be the end of Casilla’s time in San Francisco. The 36-year old Casilla, who has been with the Giants since 2010 and won three World Series rings with the team, will be a free agent after the season. When asked about next season, Casilla simply said: “I don’t know. I’m just going to wait and see what happens.”

Teams may not be lining up to make Casilla their closer, but with a career ERA of 3.19 and no stints on the DL for arm-related injuries, plenty of teams figure to be interested in making Casilla a setup man. However, the Giants probably won’t be one of them. After seven years and three world championships, it’s a shame that Casilla’s time in San Francisco will end on such a sour note. But Bochy made a choice not to use him, and now he, Casilla, and the Giants have to live with it.