Hyun-Jin Ryu Getting On Track After First Spring Start 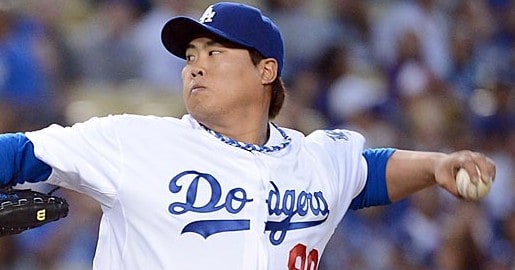 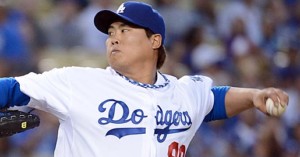 After making just one big league start over the past two seasons amidst a myriad of shoulder and elbow problems, Los Angeles Dodgers starter Hyun-Jin Ryu finally feels like he’s getting back on track after making his first start of the spring on Saturday. The Korean southpaw tossed two scoreless innings against the Angels in an outing he hopes will be a sign of things to come, as he is looking to prove that he’s finally healthy and ready to rejoin the Los Angeles rotation.

In 2014, Ryu battled shoulder issues and a hip injury but managed to make 26 starts for the Dodgers, going 14-7 with a 3.38 ERA. But a shoulder injury that ultimately required surgery forced him to miss the entire 2015 season. He fought his way back last season and despite a series of setbacks, made it back to the Dodgers for one start in July. That start didn’t go well, and Ryu was soon sent back to the DL for the remainder of the season with elbow tendonitis.

Discomfort in his thigh early in the spring delayed Ryu again, but on Saturday he was finally well enough to make his first start of the spring, which went as well as he could have hoped.

“I feel great right now,” Ryu said through an interpreter after the game. “This is the first game, I don’t want to put too much meaning into it, I just want to be ready for the opening of the season.”

Scouts tracked the velocity on Ryu’s fastball as high as 91 mph, which is a good indication that his shoulder and elbow are both healthy. During his comeback last season, Ryu would hit that mark on the radar gun early in games, only to see his velocity drop into the mid-80s later in the outing. With that in mind, the Dodgers have no plans to rush him back.

“With him, we’re being very deliberate,” said Dodgers manager Dave Roberts. “With the depth we have, there’s really no rush. We want to make sure he feels good and continues to improve. We haven’t talked about where he would be when camp breaks. It just depends on who we have healthy and where he’s built up, and then we’ll make a decision.”

The Dodgers have two open rotation spots behind the trio of Clayton Kershaw, Rich Hill, and Kenta Maeda. However, most of the candidates are coming off injuries, including Ryu, Scott Kazmir, Brandon McCarthy, and Alex Wood. Julio Urias is also an option, although the Dodgers may leave him behind in extended spring training as a way to curb his innings this season.

“I’m obviously competing for a spot,” Ryu said about starting the season in the Los Angeles rotation. “I have a few more games, and if I focus on each game at a time, I’m sure good results will follow.”

The Dodgers, meanwhile, feel that Ryu still has much to prove in terms of his health and velocity. Ryu could certainly become an asset in their rotation this season, but he may also benefit from having more time to get himself right after making just one start in the majors over the last two years.

“It’s something for us to build on,” Roberts said of Ryu’s start Saturday. “When he’s right, he’s really good. This was a step in the right direction, and we’ve got to continue to build up his arm strength and he’s got to stay healthy.”

Ryu cracking the Los Angeles rotation out of spring training is a possibility after Saturday’s promising start, although his chances of being with the club on opening day seem to be remote. Both McCarthy and Wood appear to be a little further along this spring, with Urias being an option as well. However, Ryu’s spring debut gives him and the Dodgers renewed hope that he’s finally healthy again and ready to contribute to the Los Angeles rotation in 2017.