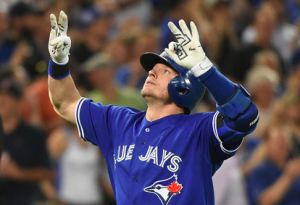 Things are starting to go from bad to worse for the Toronto Blue Jays. Just in case the team’s 1-8 start wasn’t bad enough, the Blue Jays have now placed former league MVP Josh Donaldson on the 10-day DL. Donaldson’s DL stint is because of a calf injury that has hampered the third baseman since early in spring training and that he re-aggravated during Toronto’s loss to the Baltimore Orioles Thursday night.

Donaldson originally strained his calf the third week in February just after the start of spring training. The Blue Jays took the cautious approach and wisely held him out of action so the injury could fully heal. However, calf issues have popped up again during the past week. Donaldson left a game last Sunday when he felt discomfort in his calf. He didn’t return to the starting lineup again until Wednesday, and even then he was only able to serve as a DH.

During Thursday’s loss to the Orioles, Donaldson hit an RBI double in the 6th inning to give the Blue Jays their only run of the game. However, Donaldson appeared to aggravate his calf as he approached second base. He was clearly experiencing discomfort and was immediately removed from the game. After an exit like that, it wasn’t the least bit surprising to see the Blue Jays place him on the DL prior to Friday’s game against the Orioles.

There’s no clear timetable for Donaldson’s return, but losing him is a massive blow to the struggling Blue Jays. He’s been Toronto’s most impactful player since coming to the Blue Jays in 2015, the year he won MVP. Donaldson has played a key role in helping the Blue Jays reach the ALCS each of the past two seasons, and through the first week and a half of the season, he showed no signs of slowing down, hitting .310 with a 1.015 OPS through the first nine games of the season.

Despite the slow start, the Blue Jays are still capable of doing big things in 2017. However, the team is not built to withstand injuries to key players, particularly Donaldson. Darwin Barney has filled in at third base with Donaldson in the DH spot this week, but he’s a massive drop off from Donaldson offensively. The same is true for Ryan Goins, who could also see time at third base.

The Blue Jays have called up veteran utility man Chis Coghlan to take Donaldson’s spot on the roster. The former Rookie of the Year hit an abysmal .188 between the A’s and Cubs last season and has limited experience playing third base in the majors.

“It’s tough,” Blue Jays catcher Russell Martin said of Donaldson’s injury Thursday night. “He’s a pro. He’s the kind of guy who can be a catalyst for us when he’s playing. He brings a lot of energy and he does damage when he’s playing. He’s one of the best offensive players in the league. I just see how he works, how he prepares, before he’s in the lineup or on the field. He works tremendously hard.”

Under normal circumstances, the Blue Jays may have the firepower in their lineup to withstand the temporary absence of Donaldson. However, Martin, Devon Travis, Jose Bautista have all gotten off to dreadful starts this season. Troy Tulowtizki, Steve Pearce, and Justin Smoak haven’t been much better, as Donaldson is Toronto’s only hitter who has started fast in 2017.

Right now, a grand slam from Kendrys Morales over a week ago is the only reason the Blue Jays aren’t still winless at this point in the season. Toronto’s usually potent lineup has been anything but the first half of April. Losing Donaldson to the DL for any amount of time is potentially catastrophic for the Blue Jays, who desperately need to get going, and will now have to find a way to break out of a team-wide slump without their best offensive player.