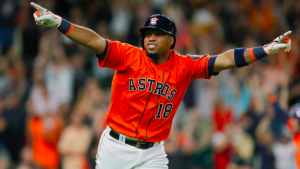 A few days after reports surfaced that a deal was close, the Los Angeles Angels have completed an agreement with free agent infielder Luis Valbuena. The deal will pay Valbuena $15 million over the next two years, with a mutual option for the 2019 season worth $8.5 million. The signing of Valbuena is likely to complete what has been an active offseason for the Angels, during which they have made significant changes to their every day lineup and bench.

Valbuena doesn’t appear to have a set spot in the Los Angeles lineup, but what he provides the Angels is depth and versatility. During his nine seasons in the big leagues, Valbuena has played all four infield positions, although his days as a middle infielder are likely a thing of the past. Valbuena figures to factor into the equation at both third base, first base, as well as the DH spot.

While playing with the Houston Astros the past two seasons, Valbuena saw most of his time at third base, although he’s also a capable first baseman. Offensively, the left-hand hitting Valbuena has come into his own as a power hitter in recent years. He hit 25 home runs with the Astros in 2015 and hit 13 more long balls last year in just 90 games, as a hamstring injury suffered in late July kept him on the shelf for the remainder of the season.

“Luis knows he’ll be in there in that lineup very regularly, and I would say pretty much the entire time against a right-handed pitcher,” Angels GM Billy Eppler said of Valbuena. “He’s going to play. We signed him for a reason — that power and that selectivity and the ability to impact the baseball.”

The Angels currently have Yunel Escobar at third base, and while the 34-year old hit .304 last season, Valbuena offers far more power, which should lead to plenty of playing time at the hot corner. Escobar will be a free agent after 2017, so it’s possible that Valbuena will become the full-time third baseman in 2018. At first base, C.J. Cron and Jefry Marte are expected to share playing time, although both are right-handed hitters, and so Valbuena offers a left-handed alternative.

Valbuena is also a candidate to see time at DH, at least early in the season. The Angels remain unsure if Albert Pujols will be fully recovered from offseason foot surgery by opening day. Adding Valbuena will give the Angels added depth and versatility that could prove to be invaluable if Pujols takes longer than expected to return.

“I know we have roster flexibility,” Eppler said. “We could potentially have a surplus, and we have some options from a handedness perspective as well.” Outside of right fielder Kole Calhoun and switch-hitting second baseman Danny Espinosa, the Angels are light on left-handed hitters, a void that Valbuena will help to fill.

Despite not having a perfectly defined role, Valbuena says he’s excited to show off his versatility with the Angels this season. “I can play all positions on the field,” Valbuena said Tuesday. “I have to be ready for wherever he needs me. I’ll be ready to play first, second, third base. If he needs me to pitch, too, I’ll be ready.”

At first glance, the signing of Valbuena may appear to be an unnecessary move, but considering the versatility and power he brings, and the need the Angels had for a left-handed bat, he’s a near-perfect signing. Valbuena preemptively fills the opening the Angels would have had at third base in 2018 and provides an extra option at both corner infield spots in 2017. Considering his uptick in power in recent seasons, Valbuena has the chance to be an impact player for the Angels over the next two years, and a good addition for a team that looks much improved from last season.