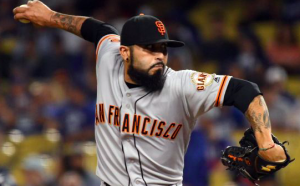 The Los Angeles Dodgers have agreed to a deal with free agent reliever Sergio Romo. The deal was first reported to be in place on Friday, but a mystery team made a competitive bid for him at the last minute, putting Romo’s agreement with the Dodgers on hold. With Romo taking part in the Caribbean Series, it took a few days to sort out the new offer. But in the end, Romo will end up going to Los Angeles for one year and $3 million, plus incentives.

According to reports, the New York Yankees and Tampa Bay Rays were the teams showing Romo the most interest until he decided to sign with the Dodgers. The Washington Nationals may have also been involved, as they continue their search for bullpen help. Romo reportedly had offers greater than the $3 million he’s getting from the Dodgers, but the southern California native passed on those offers so he could stay on the west coast.

Romo, of course, has spent his entire career up until now with the San Francisco Giants, his new team’s biggest rival. He was drafted by the Giants in 2005 and made his big league debut in 2008. He soon developed into one of San Francisco’s top setup men. Romo took over as the team’s closer early in 2012 and continued in that role until struggles during the 2014 system force the Giants to remove him from that position. However, he remained a key setup man. During his nine seasons with the Giants, Romo was part of three world champion teams, serving as San Francisco’s closer when they won the 2012 World Series. He was also an all-star in 2013.

This past season, Romo was sidelined in April by a flexor strain in his elbow. However, he returned from the DL in July and put together a solid season despite San Francisco’s well-documented issues in the bullpen. In 2016, Romo saved four games in four opportunities and posted a 2.64 ERA in 40 appearances.

He now moves to Los Angeles to join the division rival Dodgers. He figures to be an important figure in a bullpen that, at least on paper, needs help heading into the season. Despite the Dodgers re-signing Kenley Jansen, there are few spots in the Los Angeles bullpen that are solidified with spring training right around the corner. This makes Romo the favorite to serve as Jansen’s primary setup man, meaning he will handle the 8th inning.

Thanks in large part to Jansen, the Los Angeles bullpen had the lowest ERA in the National League last year. However, the Dodgers are poised to lose J.P. Howell and Joe Blanton, two of their most important setup men from last year, although Blanton remains a free agent. Considering their situation, the Dodgers had to sign an established setup man, and they are fortunate to have signed Romo for such a reasonable price, especially with other teams offering him more money.

From here, it’s possible that the Dodgers add more pieces to their bullpen. Both Blanton and Craig Breslow are reportedly on their radar, although it remains to be seen how much payroll flexibility they have at this point in the offseason. If the Dodgers turn out to be finished, adding Romo as a setup man in front of Jansen should put their bullpen in decent shape, but it may not hurt to sign another reliever or two before the start of the season.