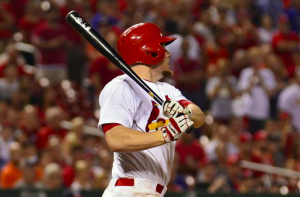 The free agent market has been slow to develop this winter for pretty much every player who isn’t a late-inning reliever. But with spring training less than six weeks away, things are slowly starting to pick up. One player who has seen an uptick in interest and activity over the past week is Brandon Moss, who is one of the top free agents still available and has received interest from at least three different teams.

Moss is easily the best power-hitting lefty available on the free agent market after smashing 28 home runs and 19 doubles in 128 games for the St. Louis Cardinals last season. Despite a disappointing .225 average, his power helped produce an impressive .784 OPS. Moss also brings defensive flexibility, as he can handle both corner outfield spots and first base, even if he’s not a gifted defensive player. He also doesn’t come with draft-pick compensation, which gives him a slight edge over free agents like Mark Trumbo and Jose Bautista.

Among left-handed power hitters on the free agent market, few have the combination of power and versatility that Moss brings to the table. Michael Saunders is close, but he doesn’t play first base and doesn’t have the track record that Moss does. Pedro Alvarez is another option whose market is also starting to heat up, but he is for the most part limited to a DH role. On the trade market, Jay Bruce is comparable to Moss, if not better, but he comes with a $13 million price tag and must be acquired via trade, making it easier to sign Moss as a free agent.

At the moment, the Orioles, Phillies, and Blue Jays are the teams most closely linked with Moss. The Orioles look more likely than ever to move on from Trumbo, and Moss could be a more affordable option. Even after the addition of Seth Smith, the Orioles would like to add another outfielder, and a lefty like Moss would certainly be on the table to join an otherwise right-hand heavy lineup. In Baltimore, Moss could play either corner outfield spot or serve as a DH, potentially in a platoon with Trey Mancini.

Meanwhile, Phillies president Andy MacPhail confirmed in a radio interview on Sunday that the team is hoping to add a left-handed bat before the season. Moss, Saunders, and Bruce have all been mentioned as possible candidates, although trading with a division foe for Bruce is less likely than signing Moss or Saunders. Moss would likely fit into right field so the Phillies don’t have to rely solely on Roman Quinn and Aaron Altherr.

The Blue Jays have been less connected with Moss, but do have a need for a left-hand hitting outfielder. Toronto appears disinterested in a reunion with Jose Bautista, but the Blue Jays are looking for another outfielder and would benefit from a lefty to balance out an otherwise right-hand heavy lineup. The Blue Jays may prefer re-signing Saunders, as they are more familiar with him, but Moss would be an obvious backup plan if Saunders signs elsewhere.

It’s still likely that Moss will have to wait out players like Trumbo, Bautista, and Mike Napoli before signing with a team, but there does appear to be a nice market for him. No power hitter is getting quite as much as he expected this offseason, and Moss will be no different. But when all is said and done, Moss should have multiple suitors from which to choose, with the Orioles and Phillies being the most likely destinations at the moment.