Market for Pedro Alvarez Heating Up 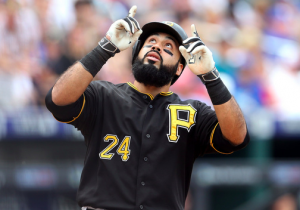 With January upon us, it’s inevitable with that many of the top free agents still available will start to sign with teams with spring training almost on the horizon. With Edwin Encarnacion off the board, top sluggers like Mike Napoli and Mark Trumbo should sign soon, opening up the market for second-tier offensive players who can fill a need as a first baseman or DH. One such player who has already seen his market start to take shape is Pedro Alvarez.

The soon-to-be 30-year old Alvarez spent last season with the Baltimore Orioles and posted the highest OPS of his career at .826 while playing a part time role. Alvarez rarely played against lefties, but he was a consistent contributor against righties, allowing him to accumulate 22 home runs and 20 doubles in 109 games.

Alvarez had to wait until March to sign with the Orioles last year after spending the first six seasons of his big league career with the Pittsburgh Pirates. But he should be able to find a team much sooner this winter. By now, most of baseball knows that Alvarez is a subpar defensive player, even if he’s capable of playing both corner infield spots. This will likely limit to American League teams, with whom he can DH most of the time, but there’s a clear market for him, as the Orioles, Royals, Red Sox, and Rays have all expressed interest in him.

At the moment, the Orioles appear to be the most likely destination after Alvarez enjoyed a productive season in Baltimore last year. At the moment, Alvarez is seen as a fallback option if the Orioles don’t retain Trumbo, but with Baltimore breaking off talks with Trumbo a couple weeks ago, it has become less likely that Trumbo will be back with the Orioles next season. The Orioles also need to address their outfield before the offseason ends, but Alvarez would be a great platoon partner at DH with Trey Mancini, who shows promise as a hitter but may not be ready for full-time duty in the big leagues, especially with a team that hopes to compete in 2017.

The Royals would also be an ideal fit for Alvarez after they lost Kendrys Morales in free agency to the Toronto Blue Jays. Kansas City has no obvious replacement for Morales lined up outside of top prospect Hunter Dozier, who may or may not require more seasoning in the minors based on his spring training performance.

The Royals have a surplus of outfielders, which could help them fill out the DH spot on a daily basis by rotating several players in and out. But with the power Alvarez brings to the table, he could give Kansas City a more prototypical DH who could fill that spot every day. He could also help the Royals bring Dozier along slowly, eventually sharing the DH duties with him much like Alvarez would with Mancini if he ends up back in Baltimore.

The Red Sox are less likely to have serious interest in Alvarez after signing first baseman Mitch Moreland last month. However, Alvarez could be a DH candidate and a potential Plan B at third base in case Pablo Sandoval struggles. The Rays are also less likely but a possibility that can’t be ruled out for Alvarez. Tampa Bay could certainly use a full-time DH who can provide consistent power. However, if there are other teams in the running for Alvarez, the price to sign him may be more than the Rays can afford.

At the moment, nothing is imminent with regard to Alvarez signing with anyone, as he will likely have to wait out Napoli, Trumbo, and perhaps even Jose Bautista. But there is already a fair amount of interest in him, so he should have no problem finding a team. In fact, based on his numbers last season, one could argue that Alvarez hasn’t received as much attention as he deserves on the open market.