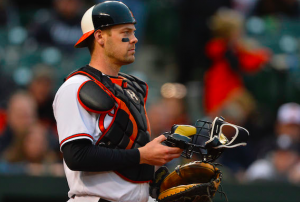 The market has been slow to develop for catcher Matt Wieters this winter, despite the fact that most considered him to be the best catcher available on the open market. There are several teams with a known interest in Wieters, but with a little more than a month until the start of spring training, there is still little clarity on where he will sign. This uncertainty has opened the door for teams to jump into the mix for Wieters at this stage in the offseason, most notably the Los Angeles Angels, who have internally considered making a move for Wieters.

Insider Jon Heyman reported on Wednesday that the Angels have had internal discussions about making an effort to sign Wieters. How serious those talks have been remain unclear, but considering how wide open the competition for Wieters appears to be, it’s possible, and perhaps likely, that the Angels will make a run at signing the catcher. Last month, we gave the Angels a 10% chance of landing Wieters based primarily on the team’s current catching situation, although if the Angels are having internal discussions, their odds of signing Wieters may increase.

Currently, the Angels have Martin Maldonado, who they traded for earlier this winter, and Carlos Perez behind the plate. The duo figures to provide solid defense but the Angels, but won’t necessarily provide much assistance offensively. Thus, Wieters becomes a candidate worth considering for the Angels as a way to boost the offensive productivity they get from behind the plate. Wieters is likely a slight downgrade defensively from Maldonado and Perez, but his offense could help to make up for that.

It’s important to keep in mind that the Angels have already made a variety of moves this offseason, acquiring Maldonado, Danny Espinosa, and Cameron Maybin via trade, while also signing Ben Revere and Jesse Chavez as free agents. Those moves have added considerable money to the team’s payroll, and so it remains to be seen whether the budget-conscious Angels want to spend even more to sign Wieters, although that concern could become moot if the price for Wieters drops.

In addition to the Angels potentially becoming involved with Wieters, the Atlanta Braves, Washington Nationals, and Arizona Diamondbacks have all expressed interest in signing the catcher. All teams have reason to be interested in Wieters, although there are reasons why each would also be hesitant to add a high-priced catcher at this stage in the offseason, leaving little clarity about where Wieters may end up.

Regardless of how serious the Angels are in their interest in Wieters, there is still no timetable on when he may sign with a team. There is also little indication about what kind of deal in terms of years and money Wieters is expecting to find on the open market. Where Wieters ends up is anybody’s guess at this point, but it would not be surprising if the Angels become suitors for him and make a concerted effort to sign him.