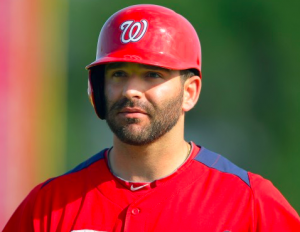 The Washington Nationals have traded infielder Danny Espinosa, who was growing increasingly critical of his role in the organization. Late night Saturday, the Nationals shipped Espinosa to the Los Angeles Angels in exchange for pitching prospects Austin Adams and Kyle McGowin.

The timing of the trade is at least a little curious, as Espinosa has become disgruntled with the Nationals in recent days. He reportedly skipped a team event over the weekend, perhaps in protest or frustration of his role with the team. Following last week’s acquisition of Adam Eaton, the Nationals are now free to move Trea Turner back to shortstop after he finished his rookie season in center field. With Turner moving back to his natural position, Espinosa would have been relegated to a bench role, which apparently did not sit well with him.

Not only did the acquisition of Eaton and subsequent move of Turner back to shortstop make Espinosa expendable from Washington’s point of view, but he is also coming off a poor season, hitting just .209 with a .684 OPS in 2016. Based on that performance, Espinosa wasn’t really deserving of a starting job with the Nationals next season. Being in his final year of arbitration before free agency, Espinosa is set to make more than the Nationals would prefer to pay a backup, prompting them to trade him. Wilmer Difo is likely to serve as Washington’s backup middle infielder in 2017.

For Espinosa, not only does he get out of Washington, but he goes to a team with whom he’ll have a chance to earn a starting spot. The Angels did not have a clearcut starter at second base heading into the offseason, opening the door for Espinosa to become an every day player. He will join an infield that includes shortstop Andrelton Simmons and another former Nationals infielder in third baseman Yunel Escobar. The addition of Espinosa is not exactly a game changer for the Angels, but they do fill a need without giving up too much.

As for the Nationals, not only do they rid themselves of a disgruntled Espinosa, but they also do something to improve a weakness. After the Nationals gave up Lucas Giolito and Reynaldo Lopez in the trade for Eaton, the team’s rotation depth in the short term took a significant hit. The additions of both Adams and McGowin have the potential to help Washington’s pitching depth.

Before the trade, McGowin was ranked by MLB.com as the 20th best prospect in the Los Angeles farm system. He posted a 6.11 ERA in 22 starts at triple-A last season, but has a solid three-pitch mix and should do better once he leaves the Pacific Coast League. He’s unlikely to earn a spot on Washington’s opening day roster, but he should serve as rotation depth if the Nationals have injuries. Adams, meanwhile, is a reliever who was solid at double-A last year, posting a 3.05 ERA. He could be an option to come up and help Washington’s bullpen during the second half of 2017.

This is not a blockbuster trade by any means, but it does serve a purpose for both sides. The Nationals part ways with a player who no longer wanted to be there, while also adding some pitching depth to their farm system, albeit with modest talent. As for the Angels, they fill their need for a second baseman. Espinosa may not be the best second baseman on the trade market, but he should be a fine place holder for 2017.