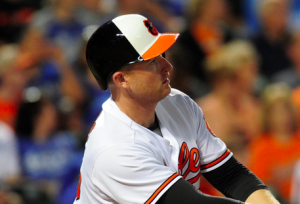 The pursuit of Mark Trumbo has in many ways defined the offseason for the Baltimore Orioles, and the saga isn’t over yet. Despite some speculation that the acquisition of Seth Smith from the Seattle Mariners on Friday meant the Orioles would be less likely to pursue Trumbo, those familiar with the organization believe that’s not the case. Even after Trumbo and the Orioles reached an impasse in negotiations prior to Christmas, he appears to still be on the team’s radar and a return to Baltimore remains a viable option.

On the surface, the addition of Smith made it appear as if the Orioles were filling their well-documented vacancy in right field. However, Smith is a platoon player and won’t play much against left-handed pitchers. Moreover, comments from Orioles executive vice president Dan Duquette indicate that the trade for Smith was made as a way to address defense and depth, not fill the hole in the lineup if Trumbo doesn’t return.

“I think the important thing is that we added a good veteran hitter to our lineup to help us in a couple of areas. Help us in the field, help us getting on base and setting up the rest of the order,” Duquette said after Friday’s trade. “We’re going to continue building the club. We’re looking to add depth. We may sign another outfielder.”

Trumbo could be that outfielder, sort of. The Orioles need to add a right-hand hitting outfielder with Smith and Hyun Soo Kim, both left-handed hitters, pencilled in as starters in the corner outfield spots. However, the Orioles likely view Trumbo as more of a DH, although he did start 95 games in right field and one game in left field last season.

Theoretically, Trumbo could serve as a DH on most days and move to right field against left-handed starters in place of Smith. That would free up the DH spot for Trey Mancini, who appears to be in line to be Baltimore’s primary DH if the Orioles don’t re-sign Trumbo. Essentially, Smith and Mancini would be in a platoon with Trumbo switching positions based on which one is in the lineup. The Orioles are high on Mancini as a power threat, but as a first baseman, he’s blocked by the presence of Chris Davis.

The addition of Smith may not make re-signing Trumbo more likely to happen, but it doesn’t diminish Baltimore’s need for a right-handed hitter who can play right field. The trade also helped to free up a little bit of money on 2017’s payroll, money that could be used to re-sign Trumbo.

Of course, even before the trade for Smith, a reunion between Trumbo and the Orioles wasn’t looking all that promising. The door for a return to Baltimore is not closed, but the two sides were reportedly far apart on the terms of a deal when talks broke off before Christmas. The Oakland A’s now appear to be a serious suitor for Trumbo, further complicating a reunion with the Orioles.

How the saga with Trumbo’s free agency plays out in the end is anybody’s guess. But it doesn’t appear that the Orioles trading for Smith will have an impact on what happens to last year’s home run king, meaning Baltimore still has a chance to get Trumbo back.