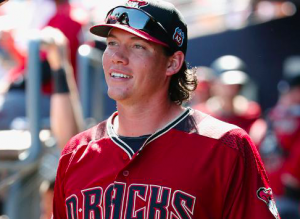 The Kansas City Royals completed a fairly minor trade on Tuesday, but one that could end up having a meaningful impact on their 2017 season. The Royals acquired slugger Peter O’Brien from the Arizona Diamondbacks for minor league pitcher Sam Lewis. O’Brien was one of Arizona’s top prospects, but he was designated for assignment last week when the Diamondbacks needed roster space for catcher Juan Graterol. The Royals moved quickly to trade for O’Brien, who could factor into Kansas City’s plans at DH this year.

If nothing else, O’Brien is an intriguing offensive player worth taking a flyer on. He was originally a second round pick of the Yankees in 2012. He was a catcher coming out of the University of Miami, but soon moved to a corner infield spot and later to the outfield. After a couple productive seasons in the lower minors, the Yankees traded him to the Diamondbacks in July 2014 in a trade involving Martin Prado.

O’Brien would go on to make his big league debut in September 2015. He then had several short stints with the Diamondbacks during the 2016 season, but ended up spending most of the year in triple-A, where he put up impressive power numbers. Between 2015 and 2016 at triple-A, O’Brien hit 50 home runs, 14 triples, and 55 doubles in 236 games. However, he has just 13 hits in 76 (.176) major league at bats, although six of those 13 hits left the ballpark.

There’s no doubting that O’Brien has serious power, although it remains to be seen whether he can hit for enough of an average and get on base at a high enough rate in the majors. A high strikeout rate is also a concern, as his strikeout rate at triple-A was significantly higher in 2016 than the previous year. O’Brien also has 32 strikeouts in his 76 big league at bats. Many also consider him to be a player without a position, as he doesn’t move well in the field and at best could be considered a below-average first baseman or left fielder.

Nevertheless, his power makes O’Brien an intriguing young hitter, especially with an American League team like the Royals. Kansas City is lacking a bonafide DH after Kendrys Morales signed with the Blue Jays in free agency, and O’Brien may be a candidate to help fill that void. The Royals have an overcrowded outfield after acquiring Jorge Soler from the Cubs last month, and so they could rotate players into the DH Spot. However, Kansas City would prefer to trade either Jarrod Dyson or Lorenzo Cain to free up space in the outfield and bring in a full-time DH.

There have been rumors in recent days connecting to the Royals to St. Louis Cardinals first baseman Matt Adams, as well as free agent DH Pedro Alvarez, and so Kansas City appears to be in the market for a full-time DH. It will be interesting to see if the Royals stop pursuing players like Adams and Alvarez after acquiring O’Brien on Tuesday. The Royals could potentially use O’Brien as a cost-efficient DH, but if he struggles there would be no backup plan outside of their excess number of outfielders or top prospect Hunter Dozier.

What becomes of O’Brien, a hitter with tremendous power, we shall see, but with the Royals he figures to get a better opportunity to prove himself than with the Diamondbacks. As is always the case with young players, there’s no guarantee he’ll pan out, but he does give the Royals a potential tenant for their DH vacancy in 2017.