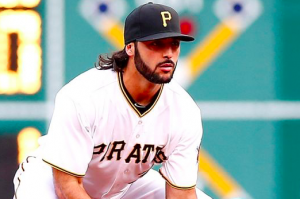 Atlanta Braves utility man Sean Rodriguez will be out for three to five months because of a shoulder injury. Rodriguez is set to undergo surgery on his shoulder, which appears to have been injured in a car accident earlier this offseason. Rodriguez was reportedly driving with his family in Miami when their car was hit by a stolen police cruiser. His wife and daughters were hospitalized with broken bones, among other injuries, but Rodriguez was said to have escaped without major injuries.

Presumably, the shoulder injury occurred in the car accident, but regardless of how it happened, the loss of Rodriguez is an early blow to the Braves in 2017. Atlanta signed him early in the offseason, hoping he could continue the super-utility role he played for many years with the Pittsburgh Pirates. Specifically, the Braves were counting on Rodriguez getting most of his at bats at second base, acting as a placeholder until prospect Ozzie Albies is ready for his big league debut.

The three-to-five month recovery timeframe means that the Braves shouldn’t count on having Rodriguez back in their lineup until June at the earliest. As a result, there are now reports that the Braves have renewed their interest in trading for Cincinnati Reds second baseman Brandon Phillips. The Braves were reportedly interested in Phillips earlier this offseason, only to have Phillips exercise his no-trade clause to block the trade to Atlanta.

Phillips grew up in the Atlanta area, and so it would make sense for him to want to play for the Braves in the final year of his contract and towards the end of his career. However, he had some kind of dispute with the Reds, with reports that the team had not fulfilled a promise they made to him. As a result, Phillips refused to waive his no-trade clause, not wanting to do the Reds any favors. Nevertheless, the door was still open for a trade if Phillips and the Reds can resolve their dispute.

As for the Braves, all the moves they’ve made this offseason indicate that they believe they can surprise people and compete for a playoff spot in 2017. Of course, losing Rodriguez is a set back for Atlanta, leaving them with Jace Peterson and Chase d’Arnaud as their internal options at second base. Neither is a great solution for a team that wants to compete, and the only alternative would be rushing the 20-year old Albies to the majors to replace the injured Rodriguez.

Other than Phillips, the Braves have few other options they can pursue to fill the void at second base. The team could look to sign Kelly Johnson, although he’s not necessarily an every day player at this point in his career, and a platoon with Peterson doesn’t make much sense, as both are left-handed hitters. Trading for Brian Dozier could be another option, but the Braves are unlikely to pay the high price the Minnesota Twins are asking for him. Moreover, Dozier has two years left on his contract, and the Braves don’t want to block Albies, who should be ready for the majors by this time next year.

As a result, the Braves have focused their efforts on Phillips. If the Reds and Phillips can resolve whatever issue was holding them back earlier this offseason, a trade to Atlanta appears likely to happen, as the Braves seem intent to fill their opening at second base following the loss of Rodriguez for the immediate future.