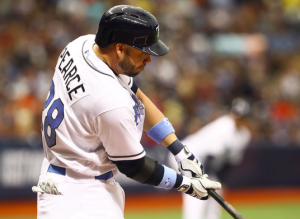 With multiple holes on their roster to fill, the Toronto Blue Jays have signed a player who can play multiple positions. The Blue Jays announced Monday morning that they have signed versatile utility player Steve Pearce to a two-year contract worth $12.5 million. The move is not a major one for the Blue Jays, and it may not prevent them from adding other pieces to their lineup, but in all likelihood, the signing of Pearce will end Toronto’s interest in re-signing Edwin Encarnacion.

Pearce is coming off one of the best seasons of his career, making him an attractive commodity this winter among complementary players. He hit .288 with 13 home runs, posting an OPS of .867 before missing the end of the season with a flexor mass strain. Pearce did most of his damage as a member of the Tampa Bay Rays before being traded to the Baltimore Orioles at the trade deadline. He struggled somewhat with the Orioles before being placed on the DL and undergoing season-ending surgery.

How the Blue Jays intend to utilize Pearce remains unclear, but he provides them with plenty of versatility. With Kendrys Morales signed to be Toronto’s primary DH, Pearce could fit nicely as a platoon partner with Justin Smoak at first base. Pearce could also be used as a backup at second base for Devon Travis, who missed significant chunks of time in 2016 due to injury.

Pearce may also end up spending quite a bit of time in Toronto’s outfield, where the Blue Jays lack power outside of Melvin Upton Jr. Pearce could fit nicely into a corner outfield spot alongside Upton and center fielder Kevin Pillar, pushing Ezekiel Carrera to a part-time role. Pearce is traditionally better against left-handed pitchers, but he did enough damage against right-handed pitchers last year to make the Blue Jays think he can play every day.

With Pearce, Smoak, and even Morales capable of playing first base, it’s unlikely that the Blue Jays will continue to pursue a reunion with Encarnacion. Toronto offered him a four-year deal worth $80 million earlier in the offseason, but the Blue Jays have since taken it off the table. It’s difficult to envision the Blue Jays finding enough at bats for Encarnacion, Morales, Pearce, and Smoak if all were on the same roster.

However, the Blue Jays may still have room to add a corner outfielder, particularly a left-handed hitter. A reunion with Michael Saunders may still be on the table, as are free agent Colby Rasmus and Mets outfielders Jay Bruce and Curtis Granderson, who both appear to be available via trade. Pearce making $12.5 million over two years should give the Blue Jays enough payroll flexibility to add another bat to a lineup that already includes Morales, Josh Donaldson, and Troy Tulowitzki.

As for Encarnacion, he may be running out of options, which could make him regret turning down Toronto’s earlier offer. With the Astros signing Carlos Beltran and the Yankees adding Matt Holliday, many of Encarnacion’s suitors at the start of the offseason are no longer pursuing him. The fact that the team that signs him will need to sacrifice a draft pick isn’t helping. The Rangers are now reportedly the team to watch with Encarnacion, while the Indians have also inquired. The Red Sox could also jump back into the sweepstakes if the price for Encarnacion begins to drop.

As for the Blue Jays, the signing of Pearce isn’t a major addition, but between him and Morales, they have helped to fill much of the void left by Encarnacion and Jose Bautista. Pearce also gives Toronto plenty of defensive versatility. Meanwhile, the Blue Jays retain enough payroll flexibility to make more additions this offseason.