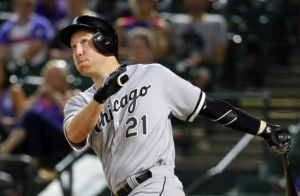 It’s possible that the Chicago White Sox fire sale that has already seen Chris Sale and Adam Eaton traded away could continue before the end of the offseason. In addition to Jose Quintana, who comes with a high price, the White Sox have several players they would be glad to part with for the right price in order to continue to collect young talent for the future. On the surface, Todd Frazier would be a great candidate, but for one reason or another, the White Sox have received little interest in Frazier this winter, which has been surprising to see.

Frazier was always going to be a trade candidate for the White Sox this winter, as he has one year left on his contract before he reaches free agency. But Chicago’s desire to trade Frazier grew when they acquired prospect Yoan Moncada in the trade for Sale. Moncada could play either second base or third base, and after he got exposure in the big leagues last season, he may be ready to play full time in the majors sooner rather than later. Trading Frazier before the season would leave the door open for Moncada to play third base in Chicago whenever the White Sox think he’s ready.

Aside from making room for Moncada, trading Frazier could get the White Sox one or two more quality prospects. With one year left on his contract and the White Sox not expected to compete in 2017, keeping Frazier does little to help Chicago. He may be a viable trade chip over the summer, but his value as a two-month rental player would be less than it is right now. There’s also no guarantee Frazier will be worth a qualifying offer next winter under the rules of the new CBA, and so Chicago’s best bet is to trade Frazier before the start of the season.

However, teams in the market for a hitter don’t appear to be expressing much interest in trading for Frazier, making it difficult for the White Sox to do so. The most recent reports indicate that teams are doing their “due diligence” with regard to Frazier, but no team is expressing serious interest in him. Granted, Frazier took a step back in 2016 in terms of contact, hitting a career low .225 and accumulating a career high number of strikeouts, but career highs in home runs (40) and RBIs (98) should help to offset that.

It would make sense for the market for Frazier to pick up once power hitters like Mark Trumbo, Mike Napoli, and Jose Bautista sign with teams, but Frazier is a third baseman, not a prototypical DH or outfielder, so interest in him shouldn’t be contingent on other players. He will cost a prospect or two to acquire, but he will also cost less than $11 million in salary, which likely won’t be the case with Napoli or Trumbo. Compared to other third baseman on the free agent market, trading for Frazier is a far better option than players like Luis Valbuena or Trevor Plouffe.

Between his power, track record, modest salary, and ability to play both third base and first base, it’s shocking to see so few teams show serious interest in trading for Frazier. The White Sox have asked for a lot in trades this winter, but they would certainly be a willing participant in trade discussions about Frazier. There’s still time for a trade to happen, but at the moment, the lack of talk involving Frazier is hard to believe.