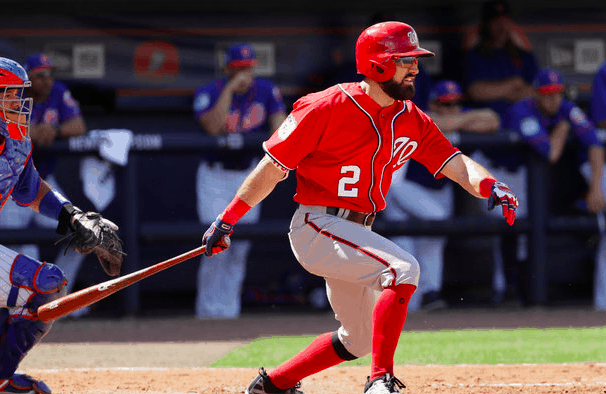 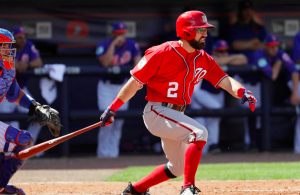 The Washington Nationals have lost their most important offseason acquisition for the foreseeable future. The club placed center fielder Adam Eaton on the 10-day DL Saturday with a sprained knee. Eaton injured the knee beating out an infield single in the 9th inning of Friday’s game against the Mets. Eaton’s hustle was able to extend the game, which the Nationals ultimately lost. Outfielder Rafael Bautista has been called up to take his spot.

“It’s just awful,” Washington starter Max Scherzer said of Eaton’s injury. “Especially when you see the replay, he comes up short of the bag and you see his ankle roll over, his whole leg kind of falls apart. Seeing him in the training room, it’s an awful feeling. You hate seeing your teammates injured severely. And I think that’s what happened.”

As of Saturday morning, the Nationals don’t have an update on Eaton’s status, as he’ll need to undergo an MRI before the team has a timeline for his return. Nationals manager Dusty Baker said Saturday that he’s still unsure if Eaton injured his knee, ankle, or both on the play. Eaton appeared to be in quite a bit of pain immediately after the injury and was unable to drive himself home after the game, so the Nationals are bracing for long-term injury and hoping for the best.

Eaton was acquired in a trade with the White Sox over the winter. Washington gave up three talented pitching prospects in the trade, which was met with some skepticism. However, Eaton has surpassed expectations with the Nationals over the first month of the season, hitting .297 with an .854 OPS. He’s also emerged as the team’s leadoff hitter after Trea Turner missed time with an injury earlier this month.

“When we traded those guys for him, everyone freaked out and said it was the worst trade of all time and this stuff,” said Ryan Zimmerman. “But he came over here and did everything expected and more, which is hard to do when you get traded for guys like that and everyone puts a lot of pressure on you.”

With Eaton out for at least the foreseeable future, the Nationals will look to Michael Taylor to fill the void in center field. Taylor has always had great raw ability and high potential, but he’s struggled to solidify a starting job with the Nationals over the past two years, which is part of the reason why the team traded for Eaton. He’s just 2 for 21 on the season but should get a chance to play every day for the time being, giving him another opportunity to prove himself.

Bautista could be another option in center field. MLB.com ranks him as Washington’s 13th best prospect. He’s known mostly for his speed and defense, but his profound lack of power may make him better suited to serve as a fourth outfielder. However, the 24-year old Bautista was hitting .291 early in the year at triple-A, so he may get a chance to play if Taylor continues to struggle at the plate.

For now, the Nationals are holding their breath that the injury to Eaton isn’t severe. Washington has quickly jumped ahead of the rest of the NL East early in the season, and Eaton has been a big reason why. Losing him for a significant period of time would be a big blow for the Nationals and hinder their chances of running away with the division early in the year.