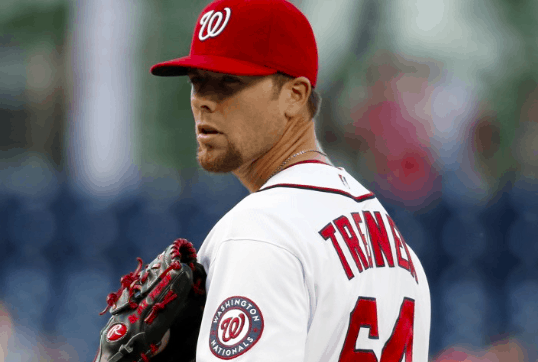 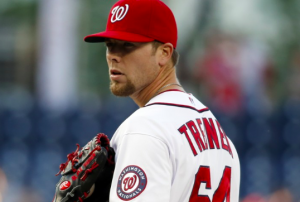 Blake Treinen has won one of the most intriguing spring training closer battles baseball has seen in quite some time. The Washington Nationals began spring training without a bona fide closer on their roster, an unusual situation for a team with hopes of competing for a World Series championship this season. On Thursday, less than a week before opening day, the Nationals announced that Treinen has won a wide-open competition to be the team’s closer, beating out Shawn Kelley, Koda Glover, and recent signee Joe Blanton.

In recent days, Nationals manager Dusty Baker hinted at the possibility of Glover, a 23-year old with just 19 major league appearances under his belt, may be leading the competition. Meanwhile, those close to the organization believed that the front office was pushing for Kelley. Ultimately, the job went to neither, as the 28-year old Treinen, who posted a career-best 2.28 ERA last season, will start the season as Washington’s closer.

“I think a lot of us came into spring willing to put our heads down and compete and be the best that we can, knowing that we’re all going to have valuable innings,” Treinen said after getting the news. “To be in the position Dusty has put me in, I feel honored. I’m excited to have that opportunity. I’m looking forward to progressing and taking it this season and doing the best I can for my teammates and hopefully locking down games for us.”

Treinen had a strong performance this spring, allowing just one hit. However, he only pitched 4.2 innings across five appearances in official Grapefruit League games. He also has just one big league save and two minor league saves on his resume, so pitching the final inning of a game is something he’ll have to get used to. Nevertheless, Baker and the Nationals are confident his stuff will play well in the 9th inning with the game on the line.

“Blake has that turbo sinker,” Baker explains. “He may give up a hit or a walk, but he’s always one pitch away from getting two outs with one pitch. He was really good at getting lefties out the second half last season. So perhaps he’s found that formula. He’s a strong young man and very durable.”

In addition to liking what they have in Treinen, the Nationals also had concerns about the other candidates. Kelley has undergone Tommy John surgery twice and Baker believes the team can manage his innings better if he’s not in the closer’s role. Glover, meanwhile, suffered a hip injury last year and has pitched just 66 innings above A-ball, so his learning curve in the majors is potentially quite steep.

Baker admits that Treinen could have some trouble making the adjustment to the closer’s role at first, but he’s given his new closer confidence that he won’t lose his job if there are one or two hiccups early in the season.

“There’s going to be some stumbles,” Baker said. “I don’t want him to think, ‘You’re going to have to stumble quite a few times before we’re going to make a change.’ But you can’t just have one stumble and get somebody else.”

More importantly for the Nationals, Treinen believes that he’s ready for the tremendous responsibility of closing out games for a team that fancies itself as a title contender.

“I’ve been through a lot,” Treinen said. “I’ve failed on the biggest stage. I’ve had success, not on the biggest stage, but in some big-time situations. I know that I can do it. Coming into this year, there was never a question in my head of whether I was capable of doing it. It was just a matter of what was best for the team. That’s what it was: What dynamic was going to be best for us to have success? I feel honored that they chose me for closer. I don’t want to ruin that opportunity.”