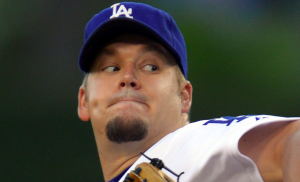 The Washington Nationals have added another late-game reliever to an unsettled bullpen that still lacks a bonafide closer. The club has reportedly agreed to a one-year deal with veteran righty Joe Blanton. The club is yet to announce the agreement, as the deal is still pending a physical. However, Ken Rosenthal reports Blanton will earn $4 million in 2017, with another $1 million possible in performance bonuses.

The 36-year old Blanton has spent most of his career as a starter, but he’s managed to make a successful transition to a relief role over the last couple of years. Blanton was an instrumental part of the Los Angeles bullpen last season. He went 7-2 with a 2.48 ERA, striking out 80 batters over 80 innings of work while helping the Dodgers reach the NLCS. He actually pitched five shutout innings across four appearances against his new team in last year’s NLDS.

Blanton figures to join the competition to become Washington’s closer this season. He will join Shawn Kelley, Blake Treinen, and Koda Glover as pitchers the Nationals are considering for the closer’s job. Veteran Joe Nathan could be considered a dark horse candidate, although he’s with Washington this spring on a minor league contract and is just hoping to make the opening day roster.

Blanton, having only a couple years of experience as a reliever, has never served as a closer. However, Kelley, Treinen, and Glover all have little or no experience serving as a closer either, meaning Blanton could very well end up winning the job. Nationals manager Dusty Baker has stated that he would like to have a full-time closer rather than rely on several pitchers rotating in and out of the role.

Whether he ends up being the team’s closer or not, the addition of Blanton is important for the Washington bullpen. Kelley and Treinen are proven set up men, but there is no assurance the 23-year old Glover will be ready for a prominent role in a major league bullpen. Having Blanton around will give the Nationals at least three veterans they’re comfortable putting on the mound in the late innings.

Of course, adding Blanton doesn’t ensure that the Nationals will find the right pitcher to be their closer or sort out the uncertainty at the backend of their bullpen. The lack of an experienced closer is still a reality for the Nationals and an unusual situation for a team that has hopes of reaching the World Series.

It will be interesting to see if the signing of Blanton causes the Nationals to give up their pursuit of Chicago White Sox closer David Robertson. The Nationals have been linked with Robertson in recent trade rumors amidst their need for a closer and Chicago’s willingness to trade its established veterans. On one hand, the Nationals could use a proven closer. Of course, Robertson comes with a heavy price tag, and the addition of Blanton does give Washington’s bullpen an adequate amount of depth.

Regardless of whether Blanton becomes Washington’s closer, signing him was a necessary move by the Nationals. Washington couldn’t enter the season assuming that Kelley, Treinen, and Glover will be able to handle the late innings and that one of them would emerge as a viable closer. It’s not a guarantee that the question marks in the bullpen will be solved, but signing Blanton is something the Nationals had to do in an effort to answer those questions.