Washington Nationals Won’t Use Closer by Committee This Year 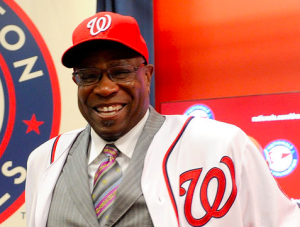 It’s well documented that the Washington Nationals lack a bonafide closer, even with spring training already underway. The team has no shortage of relievers who could pitch at the end of games. But the team still has no true closer at the moment. Manager Dusty Baker hasn’t offered any specifics on how the team will find their closer this spring, but he’s confident that someone will emerge, adding that someone will be given the job by the time the regular season starts.

“Without a real, bona fide closer, somebody always emerges,” Baker said earlier this week. The skipper adds that having multiple people share the job is not his preference. “I don’t like (closer)-by-committee,” said Baker, “because when the phone rings I want guys to know, mentally, when they might be in the game.”

Shawn Kelley appears to be one of the frontrunners at the start of the camp. He saved seven games in nine opportunities for the Nationals last season while posting a 2.64 ERA. Baker mentioned Kelley specifically as a top candidate for the closer’s job, but he also questioned, “can his arm sustain?” Kelley has undergone Tommy John surgery twice. He also posted a 6.05 ERA while pitching in the 9th inning last season.

Kelley himself is cognizant that he could be Washington’s closer this year. But he also says he’ll be fine with whatever his role ends up being. “If we came into spring training and they said there’s this kid from A-ball who throws 115 miles an hour, he’s gonna be the closer, I’ll embrace him,” said Kelley. “If Dusty needs me, then I’ll be the guy right there to answer for it.”

Blake Treinen is another reliever who figures to get an extended audition for the closer’s role this spring after pitching to an impressive 2.28 ERA last season. However, last year was the first time Treinen spent the entire season in the big leagues, and so Baker questions whether or not he’s ready to be the closer on a contending team.

“Is that fair to say that he’s a candidate for that situation, or are we rushing him because you want him to evolve rather him quickly?” Baker said of Treinen. “You want him to evolve and not destroy him. I’ve seen guys’ confidence get destroyed, too, and I’m going to call upon my past and what I’ve seen.”

If Treinen doesn’t have the necessary experience to be the team’s closer, that could also take 23-year old Koda Glover out of the equation. Glover is also coming off a hip injury and struggled in the big leagues last August and September, both of which could hamper his candidacy. However, Glover does have the type of stuff typically seen in closers, most notably a high-90s fastball.

The only additions the Nationals have made to their bullpen this offseason have been pitchers on minor league contracts. Veteran Joe Nathan is one of those pitchers who Baker could consider for the closer’s role. On the surface, Nathan seems like a long shot, but the 42-year old is the only player in Washington’s camp that has extended experience as a closer, something that could give him an edge in a competition where everyone appears to have a glaring flaw.

The Nationals have also been connected to Chicago White Sox closer David Robertson in trade rumors. However, recent reports indicate that talks have stalled between the two teams. Based on the moves the White Sox have made this offseason, they’re unlikely to come down on their asking price for Robertson, meaning it’s up to the Nationals to make them an offer they can’t refuse in order to get Robertson, who would obviously answer the question of who will be Washington’s closer.

Meanwhile, Baker remains as dumbfounded as anyone with regard to what Washington’s bullpen will look like when the season begins. Baker wants to have defined roles for his relievers, especially his closer. However, what pitchers will be in what roles is still anybody’s guess.