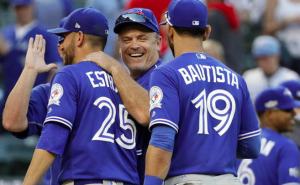 The Toronto Blue Jays have already made multiple additions to their lineup this offseason, signing both DH Kendrys Morales and utility player Steve Pearce. However, the Blue Jays are still on the market for an outfielder to complete their lineup now that Edwin Encarnacion has signed with the Indians and Jose Bautista appears unlikely to return. Toronto is reportedly kicking around a number of possibilities, including Pittsburgh Pirates center fielder Andrew McCutchen, who remains a trade candidate.

McCutchen would also be an upgrade defensively, even if he moves to a corner position in order to keep Kevin Pillar in center field. An outfield of Pillar, McCutchen, and Melvin Upton Jr., with Ezekiel Carrera serving as the fourth outfielder would be one of the best defensive outfields in baseball.

Of course, the price for McCutchen in a trade would be quite steep, especially when you consider what the Nationals gave up to acquire Adam Eaton after not matching up with the Pirates on a trade for McCutchen. The Blue Jays lack the elite prospects the Pirates may want, but they have quite a few intriguing young players, including a couple they got from the Pirates in a trade last summer.

However, the Pirates are most likely looking for prospects who will be ready to contribute in the majors in 2017, and that may not be something Toronto can offer. Outfielder Dalton Pompey would be a good candidate, as he doesn’t appear to be in Toronto’s plans for 2017, especially if they add McCutchen. But the Blue Jays don’t have many other major league ready prospects who Pittsburgh may desire in a trade.

If a trade for McCutchen doesn’t work out, the Blue Jays could then look to the New York Mets, who are looking to trade either Jay Bruce or Curtis Granderson. The Mets are more willing to trade Bruce than Granderson, which may actually make them a good trade partner for the Blue Jays, who have pursued Bruce in the past, as recently as last summer.

Bruce (or Granderson) may actually be a better fit for the Blue Jays than McCutchen. Neither would be as strong defensively, but adding a left-handed hitter may be better for the Blue Jays than adding another righty in McCutchen. At the moment, Toronto’s lineup is right-handed heavy with players like Morales, Pearce, Troy Tulowtizki, Josh Donaldson, and Russell Martin. Bruce would help bring more balance to Toronto’s lineup.

Trading for Bruce would also come at a much cheaper price than McCutchen, especially considering the numbers each put up last season. The Mets would likely ask for a major league caliber bullpen arm in return for Bruce, which would be a bargain compared to the price it would cost to trade for McCutchen, making a trade with the Mets more realistic than one with the Pirates.

Of course, with reports surfacing on Saturday that Bautista would be open to a one-year deal, re-signing him becomes more realistic. However, Toronto’s interest in Bautista this winter has been inconsistent at best, and so they may prefer to find the outfielder they covet on the trade market. If that ends up being the case, McCutchen may be their top target, but Bruce represents a more realistic option as the Blue Jays try to add one more outfielder for 2017.