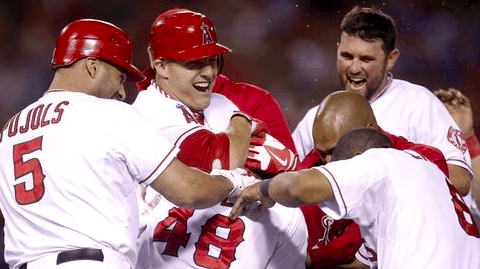 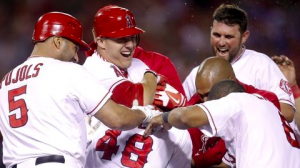 It’s hard not to feel bad for what happened to the Los Angeles Angels last season. An unfair amount of injuries, particularly to the starting rotation, made it impossible for the Halos to remain competitive. Fortunately, they’ll get a chance to hit the reset button in 2017. But will a new year bring different results for the Angels?

When healthy, the Angels have the pitchers to put together a solid rotation, perhaps even the best in the AL West. Of course, health is going to be the biggest key to the Los Angeles rotation in 2017.

Garrett Richards will be fascinating to watch this year, as he chose an alternative treatment to Tommy John surgery after suffering a high-grade tear to his ulnar collateral ligament last May. Richards was great in his six starts before the injury in 2016, and could once again be the ace the Angels need if his elbow is indeed healthy after he chose to pass on surgery.

Young lefty Tyler Skaggs underwent Tommy John in 2015 and returned to make 10 starts the second half of last season. There were both extreme highs and disappointing lows during those 10 starts, but the Angels are excited about what he can do now that he’s close to two years removed from the surgery, despite a minor setback this spring.

With Richards and Skaggs still facing concerns over their health, the hope is that Matt Shoemaker and Ricky Nolasco can help anchor the rotation. Shoemaker, of course, is returning from a skull fracture he suffered last September. Prior to that frightening event, he was able to give the Angels 27 starts, posting a 3.88 ERA. Nolasco, meanwhile, started 32 games last year, splitting the year between the Twins and Angels. Los Angeles would gladly sign up for 32 starts from Nolasco this year to help give their rotation some stability.

If Richards and Skaggs can remain healthy, and Shoemaker returns without any lingering issues, the Angels have a rotation that could be good enough to compete for a playoff spot. There are obviously few guarantees, but the potential is definitely there.

Closer Huston Street was not himself last year, posting a 6.45 ERA, although he was held back in large part by injuries. Despite his struggles, the Angels still had a bullpen that was middle of the pack in the American League, so there’s hope the team can put together another solid bullpen in 2017 if Street can get his act together. Unfortunately, he will miss the early part of the season due to injury.

Young righty Cam Bedrosian was a revelation last year and a possible replacement for Street in the closer’s spot. Lefty Jose Alvarez has also emerged as a reliable setup man over the past couple of years. Mike Morin, JC Ramirez, Andrew Bailey, and Deolis Guerra all have a chance to become steady contributors out of the bullpen. The Los Angeles bullpen won’t be dominant by any means, but it should be able to hold its own, especially if Street can return to full health at some point.

The Los Angeles lineup will be a lot different in 2017 than it was a year ago. Cameron Maybin is now in left field; Danny Espinosa will be the second baseman; and Luis Valbuena will have play a prominent role, even if he ends up playing multiple positions. Of course, there are lingering questions about the health and diminishing skills of Albert Pujols, but the Angels are in much better shape offensively than they were a year ago.

Obviously, everything revolves around Mike Trout, but he’ll have more support than he did a year ago.  Valbuena should add plenty of pop and protection for Trout, while Maybin should be a significant upgrade over what the Angels got out of their left fielders last season. The same should be true for Espinosa at second base after he hit 24 home runs with the Nationals in 2016.

The Angels also return young players like Kole Calhoun, C.J. Cron, and Jefry Marte, who have all emerged as productive players over the last couple of years. Between those returning players and those the Angels have added, there’s much more depth than the Halos had last season, giving Mike Scioscia a lot more options when filling out his lineup card.

Unless they get hit with a catastrophic amount of injuries like they did a year ago, the Angels will certainly improve upon last year’s win total of 74. Offensively, the team is in much better shape, and the bullpen should be decent as well. For the Angels in 2017, everything depends on the health of their starting rotation. If Richards, Skaggs, and company can give the Halos close to 30 starts, they’ll be in good shape.

Look for the Angels to make a 10-win improvement from last season, giving them a record of 84-78. This will at least put them on the periphery of the playoff race, which will be a nice accomplishment for the Angels in what looks like a tough division heading into 2017.