Sports Information Traders is the only place you need to go for all of your March Madness picks and information this 2015 College Basketball Tournament. Everything you need to know about March Madness is provided right here. Check out the latest news, scores, schedules, brackets, march madness betting picks, and game times for College Basketballs greatest tournament setup. Check out the directory of helpful information below provided by the NUMBER 1 sports service for college basketball betting. Helping you to make thousands of dollars off of everyones favorite sports tourney. Sign up to the left for our free picks today. 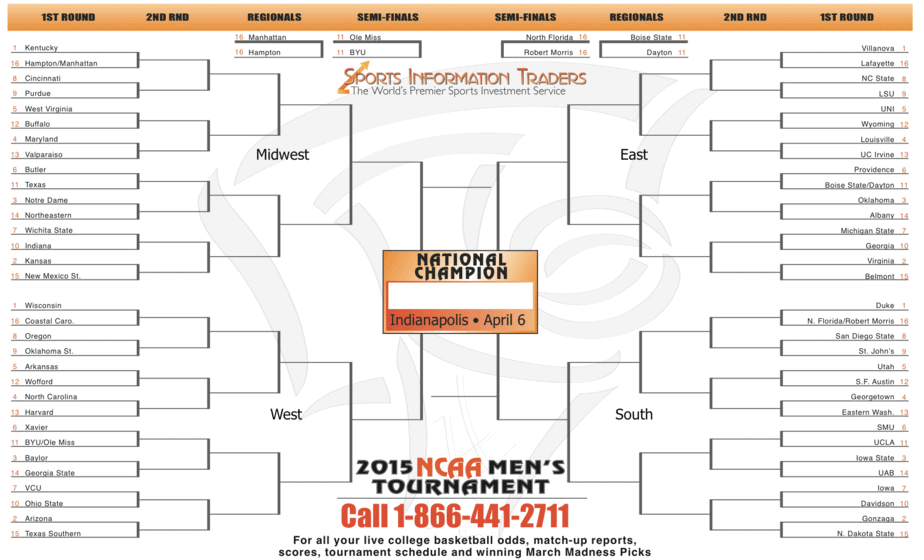 The College Basketball Season climaxes every year when the Championship tournament for men’s Division I College Basketball, known as March Madness, takes place from mid-March to early April. This event is held every spring and ends in the first week of April. Currently the tournament contains 68 NCAA basketball teams based on a tiered system of who plays who based on their national ratings, how they play in a previous tournament and other factors explained below. The tourney is organized by the National Collegiate Athletic Association and was first held in 1939. This first March Madness tournament was the result of Ohio State University basketball coach Harold Olsen. The Bid Dance (common nickname for the playoff system) has grown to become the second biggest annual sporting event in the United States right behind the Super Bowl.

Currently the tournament has automatic bids for the division champions for the 31 College basketball divisions and than 37 other teams are awarded bids and admissions into the tourney. These bids are determined by the “Selection Committee” on selections Sunday. The 68 teams are than grouped into 4 different regions for the single elimination tournament.

Every team is ranked or seeded for the 4 regions and games are played at neutral sites throughout the country. After each weekend of play 3/4ths of the teams will be eliminated taking the tournament from 68 to 64 teams to 16 (popularly known as Sweet 16) to the Final Four (4 teams) which pits the top team from each region that is left in the big dance who than play for a chance to win it all in the championship game.

March Madness is broadcasted on CBS, TNT, Tru TV, TBS, and all games can be viewed online as of 2009. If you want to fill out bracket than you must check out our march madness brackets and betting picks to win your office pool.

How Teams Qualify for the March Madness Tournament

Originally the tournament had featured 64 teams, but since adding the play-in round, the field has now expanded to 68 teams. 31 teams receive an automatic bid for winning their conference’s own tournament which follows after the regular season and prior to the start of the Championship Tournament. The only exception to this system is the Ivy League, whm instead gives their conference’s bid to the team that wins the regular season standings of their conference. For the other 37 bids which are granted at large are determined by the selection committee on selections Sunday. The Selection committe is appointed by the NCAA and they determine where the 68 teams should be seeded and placed in the bracket.

The tournament is spread across 4 geographical regions. Each region is made up of 16 teams, after the conclusion of the play-in round narrows the field from 68 to 64 teams. The field is strategically matched-up at the discretion of the Selection Committee. The top 4 teams are seeded in each of the different regions, the next 4 highest ranked teams are seeded into each region in the bracket and so forth until the 64 slots are filled up.

The Final Four takes place in the semifinal round once the field has been narrowed to 4, and then the Championship game will feature the winners of those two games, which will take place on April 6th at Lucas Oil Stadium in Indianapolis.

**Another thing to note is that the selection committee works to place teams in different conferences so that they do not meet until the regional finals. Also rematches from the regular season as well as previous years tournament games in the first two rounds (64 & 32 team rounds) are avoided when possible.