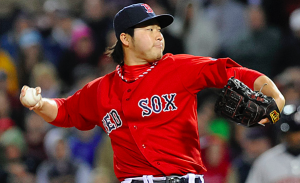 The Miami Marlins have spent most of the offseason focusing on their bullpen, and after missing out on the likes of Aroldis Chapman and Kenley Jansen despite making legitimate offers to sign each, the Marlins have finally signed a reliever. Thursday, Miami agreed to terms with righty Junichi Tazawa on a two-year deal worth $12 million.

The deal is pending a physical, as the Marlins have not yet made an official announcement. However, reports indicate that Tazawa will make $5 million in 2017 and $7 million in 2018. The seven-year veteran from Japan joins his countryman Ichiro Suzuki, who is heading into his third season with the Marlins after the team picked up his option early in the offseason.

Tazawa has spent his entire big league career with the Boston Red Sox, compiling a 3.58 ERA over his seven seasons with the club. Despite a brief DL stint in 2016, Tazawa has been the fourth most used relief pitcher in baseball over the past four years in terms of appearances. Outside of the shoulder impingement that kept him out for a couple of weeks in July, Tazawa has showed great durability throughout his career, giving the Marlins a reliable arm in the middle of their bullpen.

Of course, adding Tazawa isn’t necessarily a boost to Miami’s bullpen as much as it is just getting back to even after the team lost free agent Mike Dunn, who signed a big contract with the Colorado Rockies on Thursday. Tazawa obviously isn’t a lefty specialist, which is a role the Marlins may look to fill externally or internally with Hunter Cervenka, but Tazawa does have a better track record against left-handed hitters than righties, so he should help make up for the absence of Dunn.

Nevertheless, Tazawa isn’t the kind of high-profile late-inning reliever the Marlins were hoping to sign this winter in order to create a type of “super bullpen” to make up for a rather modest starting rotation. Unless the Marlins can trade for a closer like David Robertson or Alex Colome, the dream of that “super bullpen” appears to be all but dead. However, it does free up some money for the Marlins to sign multiple setup men like Tazawa who are solid if unspectacular.

As it stands now, A.J. Ramos is penciled in to return as the team’s closer. Ramos made the all-star team last year following a spectacular first half, although he struggled at times late in the season after breaking a finger on his throwing hand. With Ramos back in the closer’s role, Tazawa will be one of Miami’s top setup men alongside Kyle Barraclough and David Phelps.

The signing of Tazawa is a solid addition for the Marlins, but he doesn’t move the needle much after losing Dunn to the Rockies. Moreover, he’s not the caliber of reliever the Marlins were looking to add this winter, as they are still without the high-profile closer they covet. Tazawa will certainly help Miami’s bullpen, but the Marlins are one or two significant additions away from having the kind of bullpen they desire, and at this point, creating that type of bullpen by the start of the season may not be realistic.