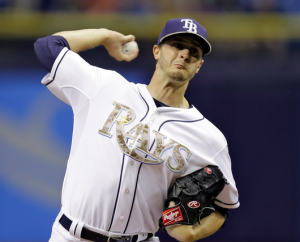 The Tampa Bay Rays made headlines earlier this month by trading starting pitcher Drew Smyly to the Seattle Mariners in order to acquire young talent. Despite losing a pitcher as talented as Smyly, that trade made sense for the Rays in that they traded from a position of strength to improve the overall talent in their organization. There are even reports that the Rays could be looking to trade another starter before spring training gets underway, with Jake Odorizzi being the most likely pitcher to be involved.

Insider Nick Cafardo sites a major league source in reporting that the Rays are indeed open to trading another starter. Naturally, Odorizzi, Chris Archer, and Alex Cobb would be the pitchers most coveted by other teams. However, with Cobb just coming back from Tommy John and being a year away from free agency, his value isn’t particularly high, and the Rays can wait to trade him until he becomes a rental option at the trade deadline this summer. Meanwhile, the Rays have received plenty of interest in Archer this winter, although they haven’t been particularly impressed with any of the offers they’ve received for him, making them content to keep their ace.

This leaves Odorizzi as the most likely option, as he’s proven to be a durable and productive starter over the last three seasons. Odorizzi is also under team control for three more seasons, making him a valuable commodity on the trade market. The Rangers were reportedly interested in Odorizzi over the summer, although whether that interest continues after signing Tyson Ross is unclear. The Pirates were linked to Odorizzi earlier this winter and could view him as a fallback option if they don’t work out a deal for Jose Quintana. The Astros and any other team pursuing Quintana could view Odorizzi the same way, creating plenty of suitors if the Rays are indeed open to trading him.

Of course, the Rays trading Odorizzi or any of their other remaining starters would signal that the team is not expecting to compete in 2017. The signings of Wilson Ramos and Colby Rasmus, as well as their continued interest in upgrading their bullpen and bench before the start of the season indicate the Rays will make an effort to compete in a stacked AL East this year. However, trading Odorizzi, who is penciled in as the no. 2 starter behind Archer, is not the move of a team that expects to contend, especially on the heels of the Smyly trade.

To be fair, the Rays have quite a few pitching prospects in the upper minors who figure to be ready to make their major league debut at some point in 2017. This gives them plenty of options to plug into their rotation if Odorizzi were to be traded. The issue is that with the possible exception of Brent Honeywell, few project as anything more than back-of-the-rotation starters, and so there would be a significant drop off between Odorizzi and his replacement.

There’s nothing to suggest that the Rays trading Odorizzi is imminent, but their willingness to part with Smyly indicates that a mini fire sale late in the winter is possible, and that’s confirmed by Cafardo’s source that Tampa Bay is open to trading another starter. The Rays would likely need 30 starts out of Odorizzi this year to have any chance to stay relevant in the AL East. The Rays may be better off waiting until the summer, assuming they’re out of contention when their young pitchers are ready to explore trades for Odorrizi and Cobb. But if they get the right offer, trading Odorizzi right now could end up being best for the club in the long run.