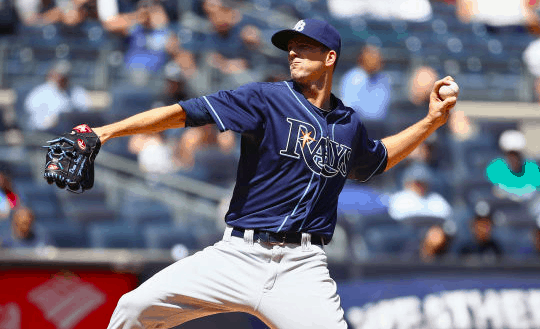 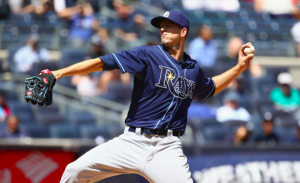 Seattle Mariners GM Jerry Dipoto just cannot stop making trades. In the span of just a couple hours on Wednesday, Dipoto made two trades (in what amounts to a three-way trade) with the Atlanta Braves and Tampa Bay Rays in which the Mariners acquired starting pitcher Drew Smyly. It was the second time in less than a week that Dipoto pulled off two trades in one day, acquiring both Yovani Gallardo and Jarrod Dyson in separate trades last Friday.

In the first trade, the Braves sent outfielder Mallex Smith and reliever Shae Simmons to the Mariners for left-handed pitching prospects Luiz Gohara and Thomas Burrows. The Mariners then turned right around and traded Smith, minor league shortstop Carlos Vargas, and minor league pitcher Ryan Yarbrough to the Rays for Smyly.

The trade was a surprising one, as the Mariners appeared to fill their need for a starter when they acquired Gallardo last week, leaving the fifth spot in their rotation open for a number of candidates to fight over during spring training. However, Dipoto decided to acquire Smith so he could quickly flip him in order to acquire Smyly, a pitcher the Mariners have had their eye on all winter.

Smyly struggled last season, posting a 4.88 ERA in 30 starts. However, he showed flashes of brilliant in 12 starts in 2015, pitching to a 3.11 ERA despite missing three months in the middle of the season because of a torn labrum. The Mariners are banking on Smyly returning to the form he had in 2015 and becoming a kind of starter they can pair with Felix Hernandez at the top of the rotation.

The additions of Smyly and Gallardo to the existing trio of Hernandez, Hisashi Iwakuma, and James Paxton gives Seattle a strong five-man rotation, with pitchers like Ariel Miranda and Chris Heston providing quality depth. It may not quite stack up with teams like the Indians and Red Sox, but Seattle’s rotation does compare favorably with the rest of the AL West.

As for the Rays, less than 48 hours after agreeing to sign Colby Rasmus, they add another outfielder to the mix in the speedy Smith. Where exactly Smith fits into Tampa Bay’s outfield is hard to figure at the moment, as both Rasmus and Kevin Kiermarier can handle center field, likely pushing Smith to left field and Corey Dickerson to the DH spot on a regular basis. The Rays could also send the 23-year old Smith to the minors at the start of 2017 for more seasoning.

Tampa Bay also added a solid pitching prospect in Yarbrough, a lefty who won 12 games in double-A last season. With a nice fastball-changeup combo, Yarbrough projects as a back-end starter. MLB.com ranks him as the 16th best prospect in Tampa Bay’s farm system. Vargas, meanwhile, is a soon-to-be 18-year old shortstop who has only played in the Dominican Summer League.

In Atlanta, the Braves are lamenting the loss of Smith and Simmons, but happy to add two more pitching prospects to an already deep farm system. “It’s tough trading away two players we really liked,” said Braves GM John Coppolella. “However, the opportunity to add two talented arms to our system was too good to pass up. We felt like we were dealing from a position of strength with both players, and we are going to keep building around young power pitching.”

Gohara is a 20-year old Brazilian lefty who dominated A-ball last season. MLB.com ranks him as the 12th best prospect in a loaded Braves farm system. He features a plus fastball and a slider that should make him tough on left-handed hitters, meaning he should at least be a lefty specialist in the majors if he doesn’t stick as a starter. Burrows, meanwhile, has limited professional experience after the Mariners drafted him in the 4th round of the University of Alabama last year. MLB.com ranked him the 25th best prospect in Seattle’s farm system, but he didn’t crack the top 30 with the Braves.

It’ll be years until the true winner of this de facto three-team trade is known for certain, but the Mariners have a chance to receive immediate dividends. Smyly has a chance to make a meaningful difference in the AL West race this year. While Seattle parted ways with three intriguing pitching prospects that the Braves and Rays may be glad to have a few years down the line, Smyly’s upside makes it a worthwhile venture for Dipoto and the Mariners.