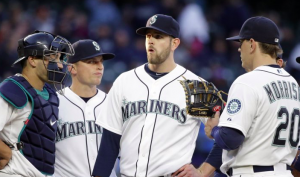 The Seattle Mariners have been one of the more active teams this offseason, particularly on the trade market, and it doesn’t appear they are done making moves just yet. Recent reports out of Seattle indicate that the Mariners would like to add another starting pitcher to their rotation before the start of the season. The Mariners have already made moves this winter to improve their lineup and bullpen, as they look to close the gap on the Rangers and Astros in the AL West, and adding another starter could be the final piece of the puzzle.

Of course, the Mariners traded away a young, talented starting pitcher earlier this winter when they sent Tijuan Walker to the Arizona Diamondbacks in the trade that brought back shortstop Jean Segura. The trade of Walker has created a couple of vacancies in the rotation behind the trio of Felix Hernandez, Hisashi Iwakuma, and James Paxton, who figure to be the leaders of Seattle’s rotation in 2017.

Adding a proven big league starter has been a goal of Seattle’s for much of the offseason, and was a focus of Mariners GM Jerry Dipoto during the Winter Meetings earlier this month. “The amount of trade discussion at the winter meetings was at an all-time high,” Dipoto describes. “There were plenty of conversations.”

The Mariners would prefer to trade for a pitcher who has established himself in the majors but is still under team control for multiple years. The problem is that such a pitcher is going to cost quite a lot in terms of players and prospects going the other way after the Chris Sale trade set the market price incredibly high on young, controllable pitchers. A weak free agent class that has few pitchers who might interest the Mariners isn’t helping.

One team to watch in connection with the Mariners may be the Tampa Bay Rays. The Rays are still undecided regarding whether they will make aggressive moves aimed at competing in 2017 or trade core players and rebuild. The Mariners and Rays reportedly discussed lefty Drew Smyly during the Winter Meetings, with Chris Archer and Jake Odorizzi likely being out of Seattle’s price range. Smyly was just 7-12 with a 4.88 ERA in 2016, so his value his somewhat low, but he has considerable upside, making him an ideal fit for the Mariners.

The Mariners and Rays would appear to have a good relationship, working out a trade in November that sent Richie Shaffer to Seattle, although he has since been released and landed elsewhere. The Rays have also showed interest in outfielder Seth Smith, a player the Mariners are reportedly shopping. With the Rays looking for an outfielder and the Mariners wanting a pitcher, a trade that revolves around Smith and Smyly seems plausible.

As it stands now, the Mariners have two open rotation spots behind Hernandez, Iwakuma, and Paxton. There are four candidates for those two spots in Chris Heston, Rob Whalen, Ariel Miranda, and Nathan Karns. Miranda showed promise in 10 starts last season while Heston had a strong 2015 season with the Giants before struggling with injuries last season, giving Seattle at least two somewhat promising options. However, Karns and Whalen are not reliable options at this point, leaving the Mariners with some concern about the amount of depth in their rotation.

This is why acquiring a reliable starting pitcher has become such a priority for Seattle. Acquiring Smyly or a comparable pitcher would go a long way towards solving their problem. But even a pitcher like Smyly would come at a high price in this market, which could make it difficult for the Mariners to acquire the starting pitcher they covet via trade.