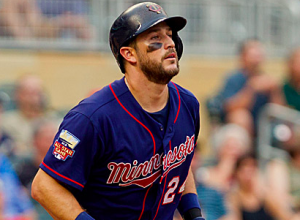 The Oakland Athletics have agreed to sign free agent infielder Trevor Plouffe. The deal is pending a physical, although it is reportedly a one-year deal worth $5 million plus incentives. Plouffe became a free agent after the Twins cut ties with him in November following an injury-plagued season. The signing comes on the heals of the Athletics signing center fielder Rajai Davis last week.

Plouffe has spent his entire career with the Twins up until now. After a few years of moving around defensively, Plouffe ultimately settled into being Minnesota’s primary third baseman and a steady offensive player. However, after a multitude of injuries held him back in 2016, the Twins decided Plouffe wouldn’t be worth the raise he would get in arbitration, and so they declined to tender him a contract, sending him to the free agent market.

Minnesota’s loss is now Oakland’s gain. Plouffe had interest from a number of teams, including the Red Sox, Braves, and Royals. However, Plouffe was always likely to sign with a team that offered him the opportunity to be an every day player, which appears to be the case with the A’s. If Plouffe is able to stay healthy in 2017 and have a productive year, he can put himself in position to land a more lucrative, long-term contract with a team next season. Based on his production in 2014 and 2015, Plouffe would seem to be a good candidate to have a bounce-back season in 2017 if he can avoid injuries and stay on the field.

Plouffe figures to take over as Oakland’s every day third baseman, most likely making Ryon Healy, who spent the second half of 2016 at third base, the team’s primary DH. Healy had an impressive rookie campaign last season, hitting .305 with an .861 OPS in 72 games. Oakland’s DH spot was previously unspoken for, and so if Healy takes over that role full time, it means Khris Davis can remain in left field on a daily basis. With him in left field and Rajai Davis serving as the primary center fielder, only right field remains an area of uncertainty for the A’s heading into the season.

It’s also possible that the A’s could see Plouffe as a right-handed option at first base. Yonder Alonso is set to be Oakland’s primary first baseman, but he struggled last year in his first season with the A’s, particularly against left-handed pitching. If Alonso continues to struggle against lefties, the A’s could consider giving Plouffe time at first base, knowing they can move Healy to third base and rotate different players into the DH spot.

One thing that remains to be seen regarding the addition of Plouffe is whether it will have an impact on Oakland’s reported interest in slugger Mark Trumbo. The A’s made a serious effort to sign Edwin Encarnacion before he chose to sign with the Indians, and it wouldn’t be a surprise to see Oakland make a similar offer to Trumbo. If Healy is locked in at the DH spot, there is less need for Trumbo, although the A’s could conceivably rotate him between right field and first base. Signing Trumbo and trading Alonso could also be on the table, although Alonso doesn’t figure to garner much interest on the trade market right now.

Whether it has an impact on Oakland’s pursuit of Trumbo or not, signing Plouffe is a solid addition for the A’s. He’s a proven veteran who’s capable of having a bounce-back year and providing steady production offensively. With both Plouffe and Rajai Davis both added in the past week, the A’s have made meaningful strides towards respectability after a disappointing 93 losses in 2016.