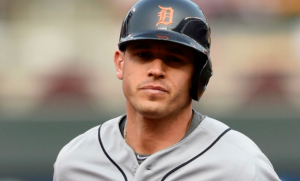 With trade talks between the Los Angeles Dodgers and Minnesota Twins regarding second baseman Brian Dozier reportedly at an impasse, the Dodgers may look to pivot and look elsewhere for a second baseman. There’s been speculation that Detroit Tigers second baseman Ian Kinsler could be Plan B if the Dodgers decide to move on from their pursuit of Dozier. Insider Nick Cafardo recently described Kinsler as a “possible fallback” for Los Angeles.

On the surface, the Dodgers trading for Kinsler is a realistic option and a good fit for Los Angeles. It would even could prove to be easier than prying Dozier away from the Twins. Cafardo quotes one baseball executive as saying: “The Tigers are a willing trade partner because they’re trying to get rid of payroll. Kinsler is still a top player and he only has two years remaining on his deal.”

Kinsler is a little older than Dozier and does have more money left on his contract, but he is still on a rather team-friendly deal for two more seasons. He also has a much longer track record for success than Dozier and is coming off his best season in more than half a decade, as the 34-year old shows no signs of slowing down. This would make him a near-ideal target for a team in win-now mode like the Dodgers, perhaps even more so than Dozier, although the current Twins second baseman would appear to have slightly more upside.

However, while the Tigers proclaimed themselves as a willing trade partner early in the offseason, they have not followed through on that resolution this winter. Most believe the reason for this is the high price they’ve set on many of their core players, including Kinsler. What the exact price would be to acquire Kinsler in a trade is unclear, but it would likely be similar to what it would take to land Dozier, a price the Dodgers have been unwilling to meet to this point.

The other issue is that Kinsler would have to approve any trade out of Detroit, and the veteran intimated earlier this offseason that he would want to sign an extension with the team trading for him; otherwise, he wouldn’t approve the deal. The Dodgers, or any team for that matter, would be reluctant to give an extension to a 34-year old who still has two years left on his contract. There’s no reason to believe that Kinsler would go back on that stance and no reason why he should.

Thus, if the Dodgers were to pivot and turn their focus to trading for Kinsler, they could end up in a game of chicken with the second baseman over an extension the same way they are currently in a game of chicken with the Twins over the price of Dozier. If neither side blinks, the Dodgers would just end up back where they started, which is without an established second baseman on their roster in 2017.

If the Dodgers can’t find a way to make a trade for either Dozier or Kinsler, they’ll be left with Enrique Hernandez and newly-signed Cuban infielder Jose Miguel Fernandez as their top internal candidates, with the aging Chase Utley still available on the free agent market. If those are the options on the table for the Dodgers, and their wish is to be a World Series contender in 2017, they’d be wise to lose that game of chicken in order to acquire either Dozier or Kinsler.