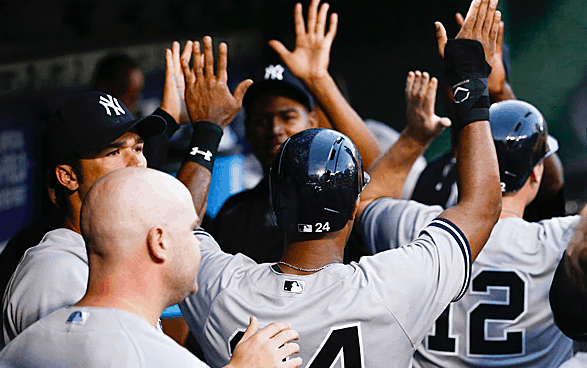 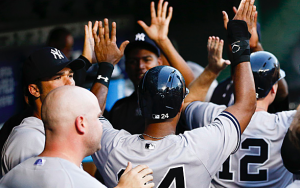 After missing the postseason in three of the last four years, the New York Yankees are turning over a new leaf. After being sellers at last year’s trade deadline, the Bronx Bombers are now loaded with young talent and willing to see where it can take them. But are New York’s young guns ready to take the Yankees to the playoffs in 2017?

The starting rotation at Yankees Stadium this season will look a lot like it did last year, with Masahiro Tanaka leading the way. If Tanaka can remain healthy and make 31 starts as he did last season, it will be a great sign for the Yankees, as questions abound throughout the rest of the rotation.

C.C. Sabathia is coming a resurgent season in 2016, but at age 36, there’s no guarantee he can repeat the 30 starts and 3.91 ERA he gave the Yankees last year. The Yankees are also hoping for bounce-back seasons from both Michael Pineda and Luis Severino. Pineda was a disappointing 6-12 with a 4.82 ERA last season, but he’s shown in the past that he’s capable of performing much better. He’s also in a contract year, so his motivation level should be high. Meanwhile, Severino was electric in 2015 but failed to build on that last season. Nevertheless, he has frontline stuff and could re-emerge as a key part of New York’s rotation this season.

If Pineda and Severino can pitch anywhere close to their potential in support of Tanaka and Sabathia, the Yankees may actually have one of the better rotations in the American League. Of course, there’s no guarantee either can pitch up to their capability in 2017.

With Aroldis Chapman back in the closer’s role, the Yankees have a chance to shorten games with a dominant bullpen, especially with Dellin Betances as the primary setup man. Betances had a spat with the front office after his arbitration hearing, but if he continues to be the pitcher he’s been the last three years, he and Chapman will be lethal against opposing lineups late in games.

To be fair, there are some questions about the rest of the bullpen. However, the Yankees did bring back Tyler Clippard last season, and he could give them a reliable 7th inning setup man in front of Chapman and Betances. New York could also use one or two of its excess starters in middle relief to help fill out their bullpen. Pitchers like Adam Warren, Luis Cessa, and Chad Green could all pitch out of the bullpen if they’re not needed in the rotation.

There will be a few young faces in the every day lineup for the Yankees this year, but there will also be a lot of familiar faces. Jacoby Ellsbury and Brett Gardner still patrol two-thirds of the outfield, while Starlin Castro and Didi Gregorious still make up a middle infield tandem that should be productive offensively and reliable defensively.

The Yankees have several players who should be solid contributors, but there’s a chance they may lack star power in the middle of their lineup, something Carlos Beltran helped supply last season. Most believe Gary Sanchez will be ready for that kind of role after a sensational rookie season, although performing over a full season is different from doing so for two months. New York is hopeful Greg Bird can come back healthy and pick up where he left off in 2015. The Bronx Bombers will also hope to receive a power boost from free agent signings Matt Holiday and Chris Carter.

Ultimately, New York’s offensive success this season may be dependent on young players like Sanchez, Bird, and Aaron Judge. The additions of Holliday and Carter are certainly x-factors, but if the Yankees don’t get significant production from their younger players, it’s hard to project them being anything better than middle-of-the-pack offensively.

It’s quite difficult to predict how the Yankees will fare in 2017, as there are so many variables. The rotation has the potential to be great, but there’s also a chance it falls flat. The same can be said for New York’s lineup, which needs young players to step into prominent roles. This could certainly happen, but there’s always the chance that those young players will go through growing pains.

Look for the Yankees to finish 82-80, a couple games behind last year’s pace. There is definitely enough potential to surpass that if everything comes together. However, it’s difficult to envision the Yankees being consistent enough over 162 games to reach the postseason this year, although they’re certainly capable of making a late-season push as their younger players gain more experience.