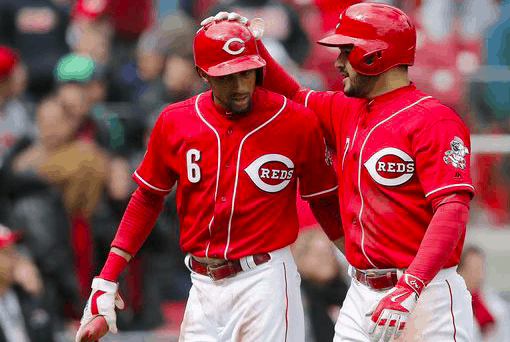 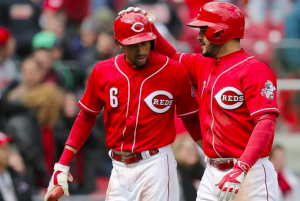 After three straight losing seasons, the Cincinnati Reds are quietly confident that they are far along enough in their rebuilding effort to make a little noise in 2017. However, believers outside the organization are hard to find. Will 2017 be another long year for the Reds, or will they start to show signs of promise?

Cincinnati’s rotation was one of the worst in the National League last season, and trading away Dan Straily earlier this offseason isn’t going to help matters, at least in the short term. Elbow surgery for Homer Bailey and a minor setback for Anthony DeSclafani this spring won’t help the Reds either. However, when everyone gets healthy, DeSclafani and Bailey should join Brandon Finnegan and Scott Feldman in giving the Reds a starting rotation that should be solid if unspectacular.

If there’s a silver lining to the injuries to Bailey and DeSclafani, it’s that the Reds may have a chance to give some of their top prospects exposure at the big league level. Amir Garrett and Robert Stephenson are two high-ceiling prospects who could see time in the majors this year. Cody Reed, Rookie Davis, and Keury Mella are three more young pitchers who could see action in the big leagues.

Of course, while getting those young pitchers exposure may be good from a development standpoint, it may not help Cincinnati remain competitive in 2017. If the Reds are going to be relevant the second half of the season, they’ll need the trio of DeSclafani, Bailey, and Finnegan to stay healthy and pitch up to their potential. Unfortunately for Cincinnati, two of the three are already behind the eight ball in terms of staying healthy, which obviously doesn’t bode well for them this year.

The bullpen is usually the last thing to come together for rebuilding teams. That was evident last year with the Reds, who had the second highest bullpen ERA in the National League, and it may be evident again in 2017. The Reds have brought in veteran Drew Storen to help stabilize their bullpen in 2017, although it appears as if the team isn’t going to have a set closer, allowing manager Bryan Price to see pitchers in a variety of situations. Again, this makes sense from a developmental standpoint, but may not be conducive to winning in the short term.

Aside from Storen, the Reds do have a number of pitchers who can be used in late-game situations. Raisel Iglesias excelled after moving to a bullpen role last season and even recorded six saves late in the season. The same is true for Michael Lorenzen, who posted a 2.88 in 35 relief appearances last year. The Reds also have high hopes for lefty Tony Cingrani, who had 17 saves in 23 opportunities in 2016 despite a modest 4.14 ERA.

It’s also possible that Cincinnati will transition some of its young prospects into bullpen roles, which could prove helpful over the course of the season. However, it’s difficult to foresee drastic improvement in Cincinnati’s bullpen from last season, although becoming middle-of-the-pack may not be out of the question.

The Reds had a decent offense for much of last season, which is an encouraging sign. However, they also had Jay Bruce and Brandon Phillips in the lineup for much of the season, both of whom are now gone. Now it’ll be up to Cincinnati’s young players to step up. Joey Votto and Zack Cozart are both still around, at least for now, but the Reds will sink or swim offensively in 2017 based on the performance of their young players.

Outfielders Scott Schebler and Adam Duvall both showed promise last season, as did third baseman Eugenio Suarez. But all three need to take another step forward and emerge as middle-of-the-order run producers who can fill the shoes of Bruce and Phillips and provide some protection for Votto.

The Reds are also excited about Jose Peraza, who should play every day now that Phillips has been traded. Peraza brings great speed to the top of the lineup, especially if he’s hitting behind Billy Hamilton. Of course, the Reds are still waiting for Hamilton to have a breakout season offensively and prove that he’s more than just a speed demon on the base paths. If the Reds can Hamilton and Peraza clicking at the top of the order, they could have two of the best table-setters in baseball this season.

The Reds had a four-win improvement from 2015 to 2016, and they should be able to continue to increase their win total in 2017. Cincinnati has a nice collection of young talent, and that includes both pitchers and position players. But having that talent and being able to rely on it to produce consistently are two different things, especially when health has already been an issue for the pitching staff during spring training.

Expect the Reds to go 73-89 this season, which is a five-game improvement from last year. It’s still a long cry from competing for a place in the postseason, but it gives them at least a fighting chance to get out of the NL Central basement, as Cincinnati’s young players will continue to flash promise despite some growing pains.